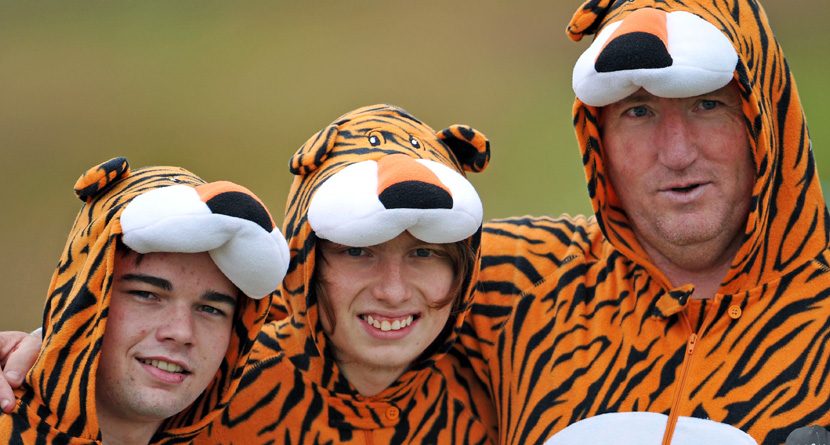 It might be held on a moonscape and attended by crowds of pasty European sorts, but a visit to the Open Championship needn’t be disorienting; you just need to know what – or who – to look out for. With this in mind, we’ve compiled a guide to the local fauna, from Dom-quaffing meat eaters to the lowliest, pro-bothering parasites:

Distinguishing characteristics: Ostentatious display of designer sunglasses, either balanced on head or affixed to collar of Lacoste polo; loafers, without socks; champagne flute.

The past few years haven’t been kind to the United Kingdom’s traders in stocks, bonds and suspiciously complex derivatives. Widely blamed for the onset of the Great Recession, their population has been thinned by a series of public culls and widespread poaching (financier pelts, prized for their oleaginous fibres, can fetch several hundred pounds on London’s black market).

As one of the few national events capable of meeting the needs of this most delicate species, the Open Championship attracts hordes of migratory bankers each year. Most remain indoors for the duration of their visit, where they exhibit a number of baffling social behaviours, but they do make occasional forays to the tented village or grandstand flanking the 18th hole. The sight of a City broker, jumper draped casually over his shoulders, is the match of any in the natural world. Magnificent. Distinguishing characteristics: Custody of at least one child, expression of ineffable sadness.

There’s a category of dad who attends the Open Championship in the hope of sharing something of himself, some formative experience or essential truth, with the egomaniacal sociopath(s) who share his genetic material. These aspirations – the dream of epic fatherhood, as it were – rarely survive the morning intact. Enthusiasm soon gives way to silent, steaming resentment.

“When I was your age, he was the best player in the world. I remember when he played Jack Nicklaus at a place called Turnberry – not far from here, actually. ‘The Duel in the Sun,’ they called it. It was incred -”

“In a minute. But anyway… Watson began the final round-”

Though it’s tempting to think of professional golfers as part of the PGA Tour furniture, they don’t get bubble-wrapped and shipped between venues like big screens and scoring tents.They are, in fact – brace yourself for a truthbomb here – relatively normal human beings. They have families, friends; they attend business meetings and corporate clinics. They meet people. A lot of people.

For this final species of spectator, the full import of the above never quite hits home. Once fortunate enough to have crossed paths with X tour player, they remain convinced that said encounter yielded “a connection”. In their most thrilling flights of fancy, they see X pausing between swipes on the range to ponder the whereabouts of  “Mark from DPI Sales” and bemoan their failure to exchange email addresses. How will bromance find its way?

“Hey X, remember me? I met you at [insert name of long-forgotten charity tournament here].”

“Okay, I guess. I have to practice now.” Like the Sentimentalist, of whom he can be considered a close relative, the Drunkard begins his Open Championship pilgrimage with the best of intentions. He envisages family bonding, excitement, brushes with sporting royalty.

But there’s a lot of walking and waiting in tightly packed crowds, it turns out. There’s rather a lot of golf, too. More, surely, than any reasonable person can be expected to endure.

And so the seductive promise of the tented village, where licensed beverages are plentiful and smiling promotions girls amble about pleasantly, carries the day. One drink leads to another – all the action’s on the big screen, anyway! – and the fog of intoxication cranks the passage of time into overdrive.

This is how elderly relatives and toddlers get left behind.

Habitat: Most often observed cresting the summits of the highest dunes, or striding purposefully towards the remotest corner of the course.

If there’s one thing British people love, it’s making rules and sticking to them. Every interaction, from queuing to the playing of chart music, has a hulking bureaucracy or public safety directive to call its own.

But if there’s a second thing they love, it’s walking. Hills, dales, highlands and moors: no geographical feature is safe from the hordes of sensible-sock-wearing, packed-lunch-carrying outdoorsy types who crisscross the island in pursuit of unadulterated Nature, broadcasting their healthiness to one and all.

[The above is inspired by true events, the awkwardness of which is embedded, like a piece of mortifying shrapnel, in my soul. Godspeed, charity caddy; godspeed.]

Other Hot Links:
– 3 Things to do Near Muirfield
– Back9 in 90: Jug Life
– Kuchar Bums Ride To Muirfield