Opinion: Why Care About Anchor Ban If Golfers Already Cheat? 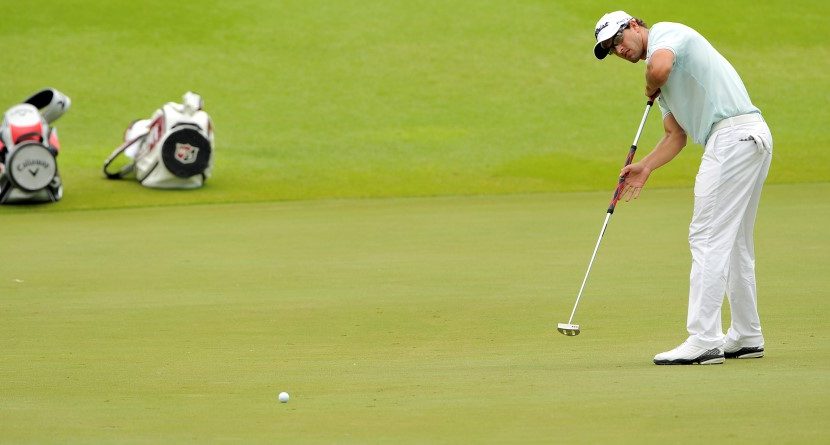 [Editor’s note: You know John Maginnes. We asked him his thoughts on the anchoring issue, and true to form, he didn’t hold back. What do you think? Tweet us your thoughts @Back9Network with the tag #AnchorBan.]

If you play golf, you are a cheater. Plain and simple. I know, I know, “cheater” is the worst thing you can call a golfer. It is more socially acceptable among golfers to cheat on their spouse, their taxes or to embezzle money from an orphanage than roll one over in the rough with a few dollars on the line. And that is my favorite thing about the game. It was ingrained in me at a young age, as it is in all juniors. But even while the integrity of the game was the foundation on which my father and others built my own personal love for the game… we were cheating.

Blasphemy, I know, but I bet you were taught how to cheat as well. As a matter of fact, it is the social way in which we cheat that makes golf the greatest game in the world. Here are a couple of words that prove my point: “gimme” and “mulligan.” See where I am going with this? The fact of the matter is that we collectively agree on the rules and how to circumvent them virtually every time we tee it up. Those words are definitely not in the official rule book, but we know exactly what they mean. You think that Mike Davis, Executive Director of the USGA, doesn’t take a “breakfast ball” off the first tee on days when warm up is impossible? Do you think he rants at his foursome when they slap away a putt that he has lagged to a foot? I think not. He is a golfer, which makes him a cheater too.

I am not suggesting that we completely throw the rule book out the window. We aren’t talking anarchy in ugly pants here. What I am talking about is a mutual agreement on which are the important rules, like stroke and distance for a ball out of bounds. Oh wait. I mean understanding the five options when your ball enters a lateral hazard. Crap. You get what I mean. We do, at least, tee it up between the agreed-upon tee markers and play the holes in order. That is a start. Actually, it is the whole shooting match.

The rules of golf were not made for those of us who tee it up on our Saturday morning game. They are made for and followed by the folks that we watch on television when we are finished. And it is for that reason that they need to be simplified. Think about it: If less than 10 percent of the people who play the game actually follow the rules, then why do they have to be so darn complicated? The USGA employs more lawyers than Donald Trump. At the recent “anchor ban” announcement, Davis was flanked by Harvard Law and Stanford Law. Makes you wonder about what Mark Twain had to say about lawyers. Look it up; it’s one thing to reference it but another thing all together to say it.

So if we can all agree on the supposition that the rules of golf don’t apply to us, then why are so many people up in arms about the anchoring ban? If you aren’t following the rules anyway, then why follow this one? At the moment, I probably have 17 or 18 clubs in my bag, but they are all legal clubs. The permissible limit, however, is 14. Interestingly, no one that I play with calls me a cheater. But that really isn’t the point, is it?

The point is that as humans we hate to have our recreation dictated to us. As golfers, we have invested a significant amount of time and energy to rise to the level at which we currently play. If you are a 14-handicap, you have put in a lot of work for that to be the case. And if you are a 14-year-old who anchors his putter, then it is understandable that you would be upset.

But this discussion actually circles back to where we started. Golf is a community. The people that we play with are our friends. So when something within the game affects them, it has an impact on us as well. I am sure there are people who don’t care one way or the other about the anchor ban, Tiger’s drop at the Masters, or deer antler spray. But those folks are somehow missing out on the communal aspects of the game.

The fact of the matter is that I don’t know if the “anchor ban” is really a positive for the game going forward, as it has been suggested by the USGA and R&A. I tend to believe that they have their priorities out of whack. But that is just me. None of the great thinkers that I read in college covered anchoring. So we are left to either follow blindly along, or come to our own conclusions.