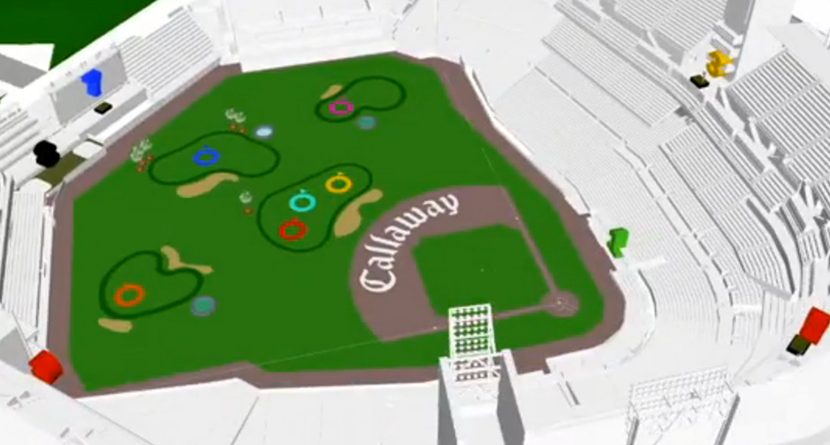 If you’re a true golf nut, you’ve undoubtedly found yourself daydreaming at a Major League Baseball game about the sport you love. You imagine the perfect lie you’d get on Augusta-like grass, perfectly manicured in the outfield. You do the math that straight away center field, at around 400 feet, seems forever away for a ball player, but really is only about 130 yards and a wedge or 9-iron for you to clear.

Well, snap out of that daydream because Callaway and the San Diego Padres have teamed up to create The Links at Petco Park, a 9-hole golf experience that will allow golfers to hit shots from around the Padres home ball park to greens situated in the outfield of the stadium.

“San Diego is a premier golf destination and Callaway is a premier golf brand, so partnering on this event makes perfect sense,” Padres Vice President of Corporate and Event Revenue Jeremy Horowitz said in a press release. “The opportunity to play golf inside a Major League ballpark does not come along every day. We are looking forward to working with Callaway to make this an unforgettable experience, and to seeing our partnership grow over the coming years.”

“We’re always trying to provide authentic golf experiences with our products that are unique and engaging, and that’s exactly what this partnership with the Padres is about,” said Callaway Sr. VP of Marketing Harry Arnett. “Playing a nine-hole course at a venue like Petco Park with Callaway golf clubs and balls will be a once-in-a-lifetime round, and we are excited to be a part of it.”

Want to hit golf balls off the top of Western Metal? You can at “The Links”! Full details: http://t.co/rqVlOpBRxw https://t.co/om3kaE7BkO

The 9-hole course will feature an opening hole built in the spirit of minigolf, putting in the home dugout. Holes 2-5 will be played from the upper deck to pins placed throughout the outfield. The sixth tee is located down the third-base foul line to a green situated behind second base. From there, golfers will move into home run territory, teeing off on No. 7 from the batters eye in center before hitting their second minigolf-themed hole in the bullpen. The finishing tee on the ninth hole sits perched atop the Western Metal Supply Co. building in foul territory down the left field line.

Each hole will have its own theme and prizes up for grabs, such as Callaway’s Great Big Bertha Driver.

Like any golf course worth its greens fee, The Links has its own 19th hole in The Loft presented by Budweiser, which will be transformed into a Callaway clubhouse where golfers can relive their nine while watching other players do their best in the unique setting.

Pricing for a tee time starts at $100 for twosomes and $200 for foursomes and includes parking, snacks, beverages and a limited edition “The Links at Petco Park” hat. Upgraded Platinum twosome and foursome packages are available for $400 and $800 and include the standard package along with a limited edition Padres-branded Callaway club and tickets to a 2016 Padres game for each golfer. A Callaway spokesman said there would be around 144 golfers will get the chance to tackle The Links over its three-day run.

Golf balls and clubs will be provided by Callaway.