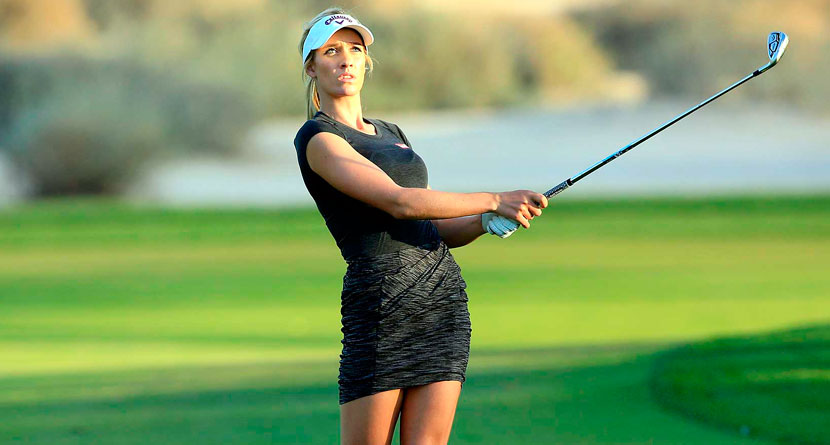 The newly-enforced dress code on the LPGA Tour is only a week old, but the blowback that the Tour has received from both inside and outside the ropes has been largely negative. The LPGA Tour’s message relies heavily on golf’s history of tradition and decorum, but many of the dissenters are grandstanding on the side of modern athletics.

While the pros on the LPGA Tour are the ones affected most immediately, up and comers like Paige Spiranac, she of social media fame, have levied a well thought out rebuttal to the new dress code that rallies around the form and function of modern day sportswear.

The Progression of Women’s Golf Is Plunging Further Than Our Necklines https://t.co/jEGCPViBhE pic.twitter.com/lkkWmYE7Ql

Spiranac voiced her opinion in a piece earlier this week on Fourtune.com.

Earlier this month, the LPGA released a new dress code policy that greatly restricts female athletes’ apparel choices on the golf course. Among the new rules: no leggings (unless worn under shorts or a skort), joggers, or anything with a plunging neckline. I respect and understand that golf is enveloped in tradition and that certain rules and regulations must be upheld. But as both an ambassador for golf and an advocate for the continued progress of women’s rights and equality in society, I fear that these new rules are stifling the growth of the women’s game.

Over the years, golf has evolved from a leisurely game of stick and ball into a competitive sport for highly skilled athletes. Players not only spend countless hours fine-tuning technique on the course, but also improving strength, stability, and endurance in the gym. To be a professional golfer in the 21st century, you must be an athlete.

In other professional sports, uniforms have evolved to contemporary cuts and materials designed to meet athletes’ elevated physical demands. Pole vaulters, for instance, often jump in sports bras and briefs to allow for maximum limb movement, while limiting the amount of clothing that could catch the bar. Tennis players wear sleeveless tops and skirts with spandex shorts so that they can hit, reach, and lunge for the ball effectively. Similarly, in order to perform at the optimal level, golfers need to be able to rotate, extend, crouch, and bend, often in extreme weather conditions for up to five or six hours at a time.

Because of the increased physicality of the sport, golf apparel companies began incorporating more performance-based materials into their designs, as well as updating styles that had fallen out of fashion over the years. Restrictive tweed, knee-length skirts turned into flexible LYCRA skirts with built-in shorts. Thick cotton polos turned into sleeveless wicking tank tops with innovative, removable sun-guarding sleeves. Experienced and new players alike began flocking to the designs both for their mix of functionality and more stylish aesthetics.

Up to this point, there have been no incidences or photos of LPGA players dressed in a way that has cast the tour in a negative light. Because of this, it’s easy to assume that the new dress code is simply a formality and won’t have much impact on the game. But if the LPGA players themselves aren’t the problem, these new rules may have been put in place as an exclusionary measure to make sure that only players who echo golf’s more traditional, conservative norms are attracted to and excel at the sport.

If professionalism in golf equals athleticism, then athleticism should be promoted and showcased, and that means allowing the clothes that promote it. By labeling women as looking “unprofessional” when showing cleavage or shorts worn under a skirt, the LPGA is perpetrating the outdated stereotypes about the connection between what a woman wears and her morals, as well as insinuating that women do not have control over the perception of their bodies, but rather that they must bend to the every whim of the male gaze.

If the issue is with the younger, up-and-coming players who are either tirelessly grinding their way through the Symetra and mini-tours or picking up a club for the first time, the establishment of this new dress code can no longer be seen as a formality, but rather as a regulation that is prohibiting a much-needed culture change for this great sport.