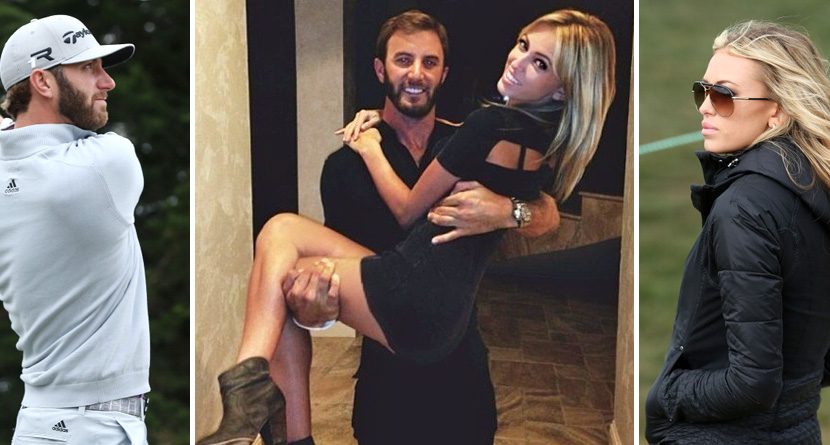 This week Dustin Johnson and Paulina Gretzky announced their engagement to the world over social media because this is how we make big announcements now — DJ tweeting a picture of the rock he gave her along with the words “She said yes,” and Paulina Instagramming a photo of the two of them kissing. They seem incredibly happy, and they should be. They’re young, famous, rich, attractive and in love. Not only that, but both of them have a lot to gain from this marriage — perhaps Dustin more than Paulina.

Most of us know that Paulina is the daughter of hockey god Wayne Gretzky. And sure, over the past 10 years she’s done some modeling, acting and singing. She’s dabbled. But being Dustin Johnson’s wife could make her a household name. He has seven PGA Tour wins, he’s earned more than $19 million in his career in tournaments alone, he’s 16th in the FedExCup rankings and he’s one of the most powerful ball strikers in the PGA. Dustin is a tremendous athlete at just 29 years old… and that soul patch!

As for Paulina, while her Wikipedia bio may not be as long as Dustin’s, she has the potential to be the more powerful member of this power couple. She was on the cover of Flare Magazine starting at the age of 16. She has more than 208,000 followers on Instagram (5 times that of Dustin) and 76,000 more followers than Dustin on Twitter.

On Sunday, the day that the two announced their engagement, more people Googled Paulina Gretzky than anything else on the Internet. In fact, for 21 months straight, since November 2011, Paulina has far surpassed Dustin in search interest according to Google Trends. Those are just the numbers. Now let’s talk about the 2013 Masters. Next to Lindsey Vonn, Paulina was easily the most-photographed woman behind the ropes. (And it didn’t hurt that she was wearing a tank top and a tight pair of white jeans.)

That brings me to my next point. Paulina isn’t just good for Dustin. She’s good for professional golf.

Who wouldn’t want to see someone who looks like her at tour events? She pushes limits. She catches eyes. She makes all of us watching want to go on protein-only diets. And so what? We need to see more sex appeal in the gallery. During the final round of the PGA Championship this year, when the cameras cut to Jason Dufner’s wife, Amanda, in that sophisticated white sundress, her simple beauty only added to the occasion.

People are interested in other people; and these are the women behind the men we love to watch on tour. They’re the ones who get to see a side of them no one else sees. That’s why we shouldn’t miss any opportunity to get to know them better. But it’s not just getting to know the wives, it’s getting to know the Tour and the lifestyle surrounding it.

Paulina will post sexy pictures of herself at sexy golf resorts on Instagram, at the same time promoting the tournaments and the drool-worthy golf destinations where they’re played, and those same Instagram followers will be watching the tournaments to catch a glimpse of her following Dustin.

He draws the cameras and she keeps them rolling. Seems like a match made in heaven.

More From Bosworth: Dammit Tiger, Curse Away! | Mahan of the Year?