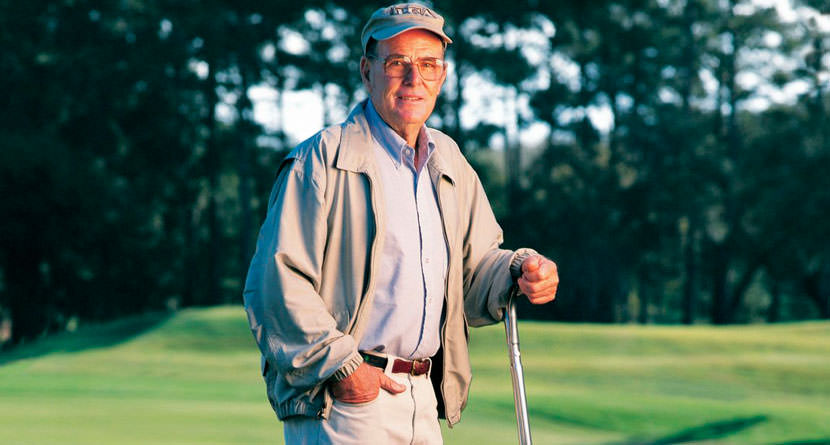 The brilliant mind behind such great golf courses as Harbour Town, Whistling Straits, TPC Sawgrass and over 200 others has been stricken with a disease that will continue to rob the world of his personal brand of architectural genius.

Pete Dye, perhaps the game’s most transformative course designer, has been stricken with Alzheimer’s. It’s the cruelest of ironies that Dye is fit enough at age 92 to play golf most days but no longer can articulate the ideas that altered the rubric of golf course architecture.

“It’s such a tragedy that such a wonderful mind is being lost,” said Alice, who has been his faithful sidekick on a number of his works, including the renowned Stadium Course at TPC Sawgrass, during their 68 years of marriage. She couldn’t muster any more words except to say, “you should talk to the boys,” meaning their two sons, Perry and P.B.

The golf architecture fraternity has known for a while that the Dye family has been suffering in silence as the disease has progressed. “Pete really hasn’t been Pete for some time,” said Dr. Michael Hurdzan, another Ohioan who has enjoyed Dye’s friendship for years. “What a shame that is, to not only lose the person but also all those ideas. And let me tell you, they were revolutionary.”

“It’s the end of an era,” added Bill Coore, who worked for Dye for three years and is now enjoying a sensational run partnering with former Masters winner Ben Crenshaw. “Before Pete came along, golf architecture was Robert Trent Jones and that philosophy. That was the standard. Pete took the game and design in a different direction.”

The onset of the illness wasn’t noticeable until the summer of 2015, at The Golf Club, of all places—the layout that brought him his first accolades and where he initially introduced railroad ties to American golf architecture after he and Alice ventured abroad to study the courses in Scotland. His younger son P.B., who assisted Pete on the renovation of the greens, detected slight changes in his father’s ability to communicate.

Since then his faculties have declined steadily. But one thing brings him around, igniting a visceral reaction that restores a bit of who he is, and that is the game. “There are moments of brightness, and it’s when he’s walking down a fairway,” Perry said. “And whether he mumbles something or draws something up or just is standing there and looking at a golf hole, it’s kind of the best he can be anymore. Something kicks in.”

The entire piece is worth your time. You can read it here.