Peyton Manning Uses Golf to Warn Rookies of his Wrath 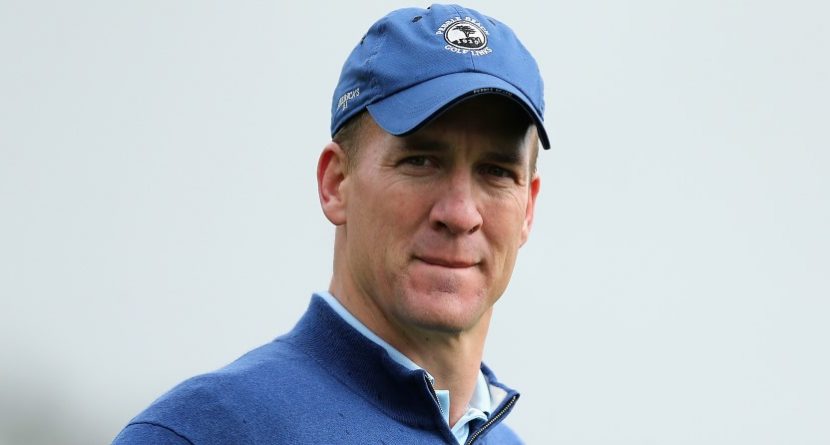 Peyton Manning likes to be in control. He wants to know what every player on his team (and the other team, if possible) is doing, and that they’re going to do it the way he wants. Or haven’t you noticed all the gesticulations and Omahas and directing teammates where to stand?

Turns out the quarterback’s controlling nature plays out on the golf course too.

Every May since Manning joined the Denver Broncos, the entire squad has taken a golf outing. Wide receivers aren’t grouped only with other wide receivers; linebackers don’t play with only other linebackers. Each foursome is mostly made up of guys who play completely different positions, or barely know each other. The event is part competition, but more team bonding.

Not surprisingly, Manning picks his own golf partners. And he’s very particular; they’re often rookies. And he gives them golf lessons, because none of them are ever as good as he is. And the players say his methods on the links are very similar to what they’ll encounter on the gridiron.

“It was exactly like his coaching on the field. It transfers over,” newly-drafted wideout Cody Latimer, one of Manning’s victims partners last month, told the Wall Street Journal. “He wants everyone to be on their Ps and Qs.” And he wants his foursome to play well, because even though the day is only sort of competitive, Manning is always really competitive. So the QB quickly went about fixing Latimer’s swing, so much so that he basically made the rookie stand with his back to the fairway to accommodate the hook in his swing. Before long, Latimer was actually sending his golf ball toward the hole.

“He was so precise. He told me how to stand. Where to put my feet. You have to take it all in, figure out his adjustments and do everything he says and you end up on his good side,” Latimer said.

With that attitude, Latimer might actually get some reps within the Broncos’ deep stable of wide receivers. Just look at running back Montee Ball. He was selected for Manning’s foursome last year as a rookie, and now he’s slated to be the 2014 starter in the backfield.

“He wants to size us up, not just physically but see where we are mentally,” Ball continued. “It’s for us to see what kind of character he is off the field and what there is to expect. He was coaching me up, telling me what to do and I was taking it seriously.”

A year later, Ball now takes golf seriously too. He aims to progress to a level at which he’d be able to play with his quarterback again. That might take some time, though. Manning is a 7 handicap, holds his own in PGA Tour pro-ams, and can get around Augusta National in less than 80 strokes.