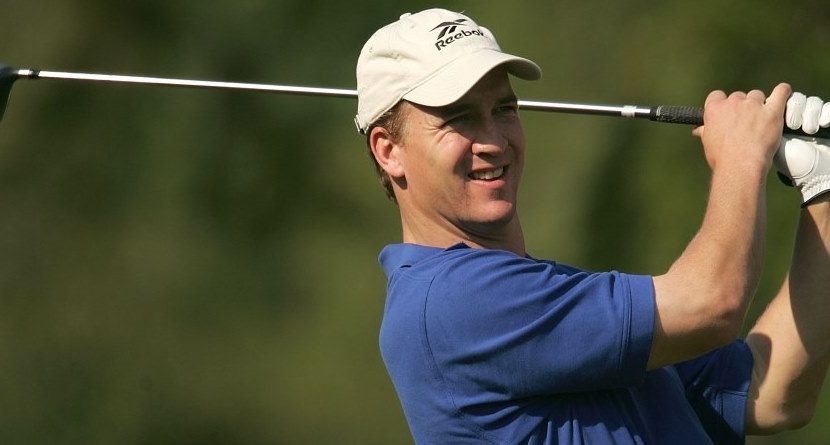 Previous Page: Back9 in 90 – Racing To The Finish

If you didn’t know this already, Peyton Manning is the man you want to be. He’s wealthy, he’s funny, he’s one of the best quarterbacks of all time. If that weren’t enough, he’s a damn good golfer too.

The Denver Broncos QB told the L.A. Times that he hit his second hole in one earlier this month at the Castle Pines Golf Club, an award-winning Jack Nicklaus Signature Championship golf course just a few miles from the Broncos training complex. His first ace was in college.

One of the golfers was Tom Harrington, a Broncos fan who said he sports an orange tuxedo and top hat at home games.

“You’d have thought he made (the hole in one),” Manning told the Times. “He was that pumped.”

Eventually Manning joined up with Elway, a pairing many Broncos fans would pay good money to walk the course with. Even more money if the football legends dueled at the country’s most famous course, Augusta National.

Well, fans were not present, but Manning, Elway and Broncos head coach John Fox all played 54 holes on the famed course last weekend. Manning carded a 77, but was topped by Elway, who shot 79, 74 and 72.

Fox was never in contention. “I started out as a 14-handicap, but after they saw the way I was playing, they moved me to a 20,” the coach said.

Manning also bonded with his teammates earlier this month, as he rented a bus to take 30-some players to Coors Field for a Rockies-Yankees baseball game. While there, Manning orchestrated this prank on his right tackle, Orlando Franklin:

Manning got the team-bonding idea from Fox, who organized a nine-hole golf outing for the players last spring.

“It’s probably a good thing it’s nine holes and not 18,” Manning recalled last week. “Forty sets of rental clubs last year, which tells you how many non-golfers we have on this team.”

The Broncos have a pretty good one at quarterback, though.