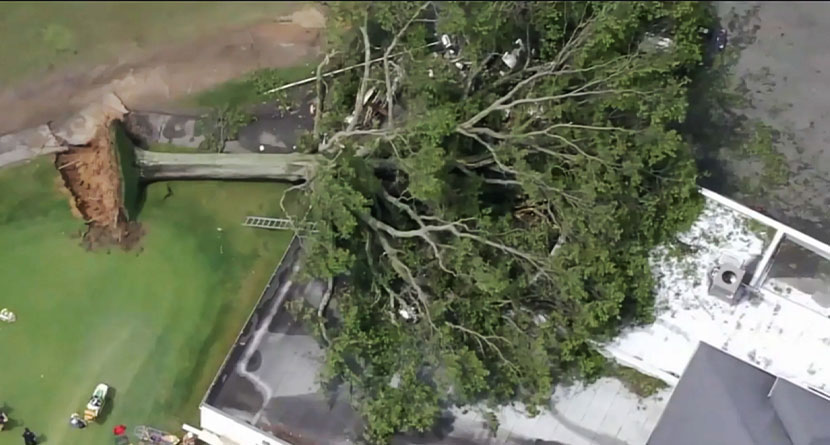 The storm, which came through Philmont C.C. around midday forced an all-hands-on-deck evacuation of the course, according to a story in the Philadelphia Inquirer. Riegel was taking golf carts back indoors when the thunderstorm caused a large tree to uproot and fall on the building, trapping Riegel inside.

“The storm blew in and everyone was rushing in, and before we knew it, a tree fell,” Philmont employee Kelli Patrick told 6ABC.com.

“The tree came down onto the building, then most of the building came down on the golf cart area where this gentleman was at,” Lower Moreland Township’s emergency management coordinator, Bob Scholly Jr.

From Chopper 6 you can see the tree on top of the club house. One person is trapped inside. Lower Moreland Twp official says they have not made contact with the individual. It could take crews a couple hours to work their inside. @6abc pic.twitter.com/dmtP6EVJNB

He was also very involved with the Philadelphia PGA Section, serving on a number of committees and as chair of the Philadelphia Assistants Organization. In 2015, he was selected as the Section PGA Assistant Golf Professional of the Year.

Perhaps most tragic of all, Riegel leaves behind a grieving mother and his girlfriend, Kate Hannon, who is due to have the couple’s first child in a few days.

“Justin was one the most caring individuals you could ever come across. He was that guy who would call just to see how you’re doing and make sure everything was great in your life,” a GoFundMe started for Hannon and the family reads. “We’re raising funds to help Kate and the kids get through these awful times and to start a college fund for the kids. Please consider donating as much as you can, Justin would be the first one signing up to help anyone else out.”

As of this writing, the fundraiser has generated more than $275,000 in donations in just four days. If you would like to donate, visit the GoFundMe page here.