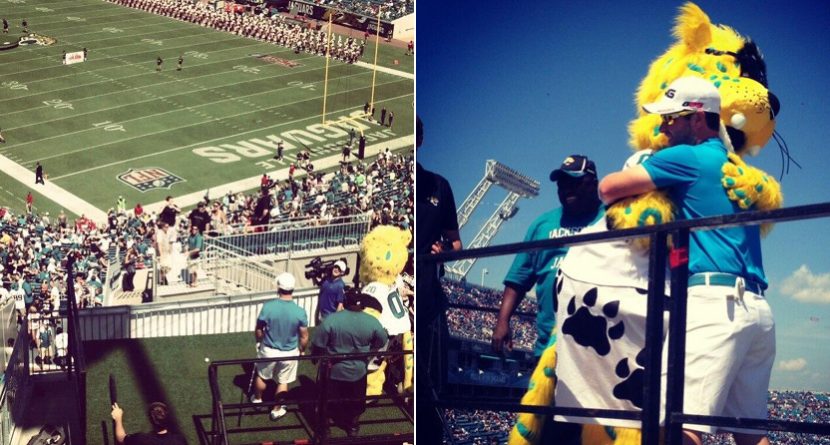 In the first of eight battles this year, the golfer beat the cat.

On Sunday at EverBank Field, home of the NFL’s Jacksonville Jaguars, PGA Tour pro David Lingmerth hit it closer to the pin than Jaxson de Ville, the football team’s mascot. For his shot, Lingmerth’s charity of choice, The First Tee of North Florida, received a $10,000 donation from the Jaguars Foundation.

Each contestant hit a 125-yard shot from the Sky Patio in the stadium’s south endzone to an island green at midfield. Closest to the pin wins. If Jaxson had won, $1,000 would have been donated to The First Tee and every fan at the game would have received a complimentary order of Papa John’s cheesesticks. Had either Lingmerth or Jaxson sank a hole-in-one, a previously-selected fan would have taken home $1 million.

The Jaguars plan to hold the golf contest with a different PGA Tour pro during halftime of every home game this year. Jaxson’s next chance will come Sept. 29 as the Jaguars host the Indianapolis Colts.

We’re ardently searching for video of Sunday’s contest, but until we find it, here’s what went down on Twitter:

.@DLingmerth hit it closer, meaning a $10,000 donation to @TheFirstTee of North Florida!

.@DLingmerth won the contest, but thankfully he and Jaxson de Ville can remain friends. >> pic.twitter.com/U7cBvvaRwE

That was fun! Thanks @PGATOUR @jaguars and @JaxsonDeVille for making it happen. Glad I could help @TheFirstTee north Florida with $10,000