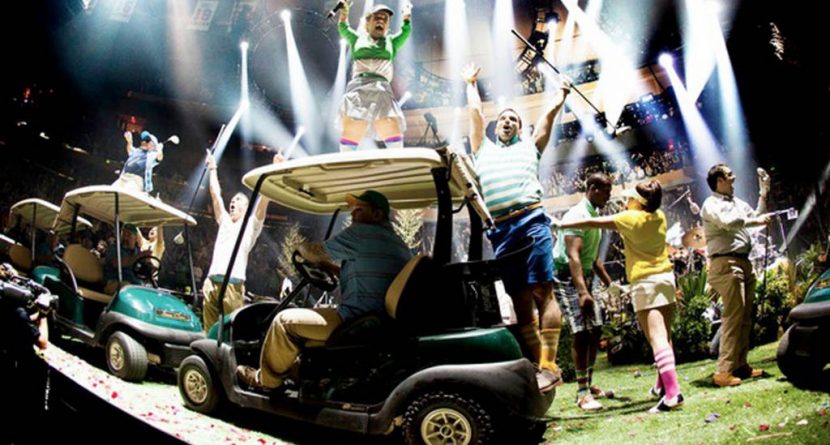 NEW YORK – They said they could stage a runaway golf cart marathon, and they did. Rock behemoths Phish – inimitable, indefatigable and unparalleled – turned fabled Madison Square Garden into a golf course, raced golf carts around the arena, and then played a golf-themed third set to ring in New Year’s 2013 to thunderous applause from the most loyal fan base in rock.

“Unbelievable!” gushed life-long Phish fan Rodney Zilla of New York. “It was the best New Year’s Eve gag since they introduced the flying hot dog at Boston Garden in 1994. Even the balloons they dropped on the crowd this year had dimples on them like golf balls! This band thinks of everything!”

Indeed they do. First, they Astro-turfed every inch of the Madison Square Garden floor and lined the stage with fake trees and bushes. Between Sets 1 and 2, a golf cart drove on stage and golfers hit beanbag and plastic golf balls into the audience and off the MSG scoreboard.

It was at that moment that experienced Phish fans suspected they might play the old school song “Kung,” which references a runaway golf cart marathon.

“Jay called it,” noted Zilla, referring to your author. “He looked right at me and said, ‘They’re gonna play ‘Kung’ tonight.'”

Then as midnight approached and the lights went down, the band came out and hit balls into the audience. Drummer Jon Fishman even donned knickers, a Tam O’Shanter and the loudest sweater vest he’s worn in his life. Then they opened the third set with “Party Time.” (Get it? “Par Tee Time?”)

As suspected, “Kung” was next, complete with golf carts driving on stage. Then the runaway golf cart marathon ensued during “Chalk Dust Torture,” played perhaps – according to some fans and Phish experts – as a nod to the first time the band played the David Letterman show, where they also played “Chalk Dust.” After all, the band is never far from its own history, and such historical references pepper their shows time and again.

As “Chalk Dust” ended, 50 dancers clad in golf attire took the stage with light-up golf clubs for the countdown to 2013, “Auld Lang Syne,” and “Tweezer (Reprise),” which resembled a Broadway song-and-dance number and featured Broadway performer Carrie Manolakos as guest vocalist. It was a full-blown production that sent the crowd into frenzy, while the “Wall of Light” – Phish’s world-class light show – blazed like the sun in the heart of MSG.

“Pink Floyd has nothing on Chris Kuroda,” said fan Janice Woodward, referring to the band’s outstanding lighting coordinator, who has been with the band throughout its history.

The band then returned to playing songs with golf themes in the titles, including “Sand,” “The Wedge,” “Fly Like an Eagle” (for the first time in their 30-year history), “Wilson” (which makes, among other things, golf equipment), “Lawn Boy,” “Driver,” and Black Sabbath’s “Iron Man” (also performed in its entirety and with vocals for the first time. The band did play an instrumental version of the song during the 2003 New Year’s Eve show.)

Interestingly, guitarist Trey Anastasio botched the opening bars of “Driver,” so the band had to start the song over – they took a mulligan, so to speak, so as not to card a bogey. Even so, fans were delirious over not only the New Year’s Eve show, but the entire four-night MSG run.

“They were as tight as they were in the old days, if not tighter. They are playing tremendously, and whether experimental jamming or rocking out, they are as great as they’ve ever been,” stated life-long Phish fan and NYC denizen Marc Shulman. “The good ol’ days were the good ol’ days, but these are also the good ol’ days. Even fans in love with Phish 1.0 (from 1983 to 2000) couldn’t complain about Phish 3.0. (2009 to present). And as for doing an entire themed New Year’s set? They’ve never done that before. This New Year’s show was the most superior of the last three New Year’s shows.”

“The themes of the last three New Year’s gags spell out MSG!” noted Shulman. “‘M’ for Meatstick in 2010, because they played ‘Meatstick’ to start Set 3 and flew the giant hot dog around the arena at midnight, ‘S’ for Steam in 2011 and ‘G’ for golf in 2012…although it would have been better if the G stood for ‘Gamehendge.’ That would have been way, way better,” he concluded, referring to the ultra-rare Phish quasi-rock opera born from Anastasio’s senior music thesis at Goddard College.

Nevertheless, the buzz surrounding the global “MSG” themes over the past three New Year’s shows has been the talk of the rock world. Some Phish experts downplay it as mere happenstance, perhaps the fans seeing what they want to see. Yet since the band’s triumphant return in 2009 – called “Phish 3.0” – spelling out messages in set lists and other meta-jokes have become common.

In the recent past, they’ve played one show where every song began with the letter “S,” another show where the song titles spelled out a secret message in the form of an unprintable song title and yet another show where all the song titles were elements, such as “Fire,” “Water in the Sky,” “Dirt,” “Light,” “Steam” and so forth. As early as 1994, the band was playing entire albums, both their own and those of other artists, as live sets, but such creativity has especially blossomed since Anastasio’s well-publicized and successful sobriety.

“Such playfulness and interactivity with the crowd just gets better every year. That is the essence of Phish spirit!” explained Shulman. “Back in the day it was big ball jams and chess matches against the audience. Now spelling out messages is a continuation of that history and creativity.”

“Accounting for the number of days of the year, letters of the alphabet, venues they’ve played, and so forth, I calculate the odds of it being an accident as 1 in about 5 billion,” he noted magisterially. “The band should play the lottery if they are hitting odds like that. The odds of being struck by lightning at any given time are only 1 in 2,000,000. They could have been struck by lightning 2,500 times before their gag could accidentally happen again.”

“Let me tell you something,” confided Zilla, when he heard those odds, “When those golf carts were racing around stage I bet the audience felt like they were struck by lightning 2,500 times, that’s how electric that was!”

Was it deliberate? As the band might sing, “Maybe so, maybe not.” Knowing them, they’ll never tell. But accident or no, there are, indeed, some indisputable truths about Phish as they enter their 30th year.

First, the golf gag was unquestionably a classic time-capsule moment in their already illustrious history. More than any other band on Earth, you can expect the unexpected and the superlative from Phish time and again.

Next, Phish is undeniably a first ballot Rock ‘n’ Roll Hall of Fame inductee. They’ve come a long way since the basement of the dorm at University of Vermont playing rock covers and Anastasio’s senior thesis.

Moreover, NYC loves Phish, so much so that Phish needs to make a run at one of the two big MSG records: longest consecutive run of shows (Billy Joel, 12) and most concerts performed (Elton John, 62). To date, Phish has played 27 MSG shows. Yes they are from Vermont, and yes, they have deep ties to Boston, but New York loves Phish and Phish loves New York. They consider it a second home and for Anastasio it’s a first home. That tie needs to be strengthened with a historic record.

Most importantly for our purposes, they like golf! Woo-hoo! So until we get them out on the course for real, enjoy these video clips.