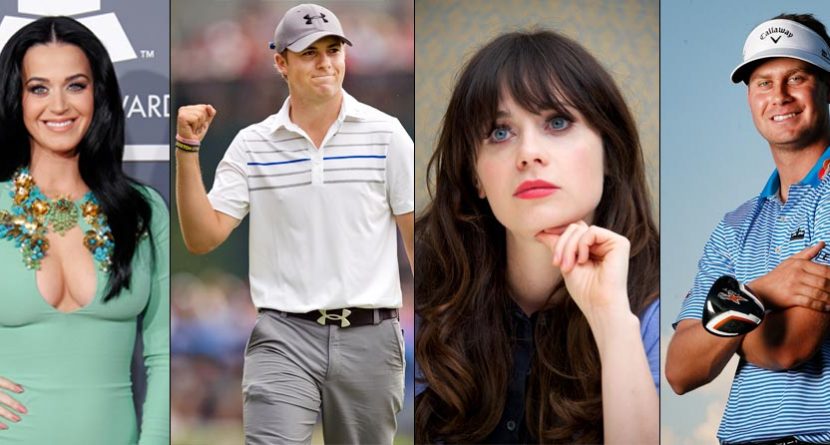 Aside from getting stuck in an elevator for an afternoon or sharing a fox-hole in combat, there are few surefire ways to really get to know how someone ticks other than playing a round of 18. What if one of the heavyweight online dating sites put golf’s bonding cred to the test and created a pro-am bent on inspiring the next Wozzilroy or DJ & Paulina?

To make sure the birds will be chirping, we did all the compatibility tests and matchmaking Sudoku in order to arrange the hottest hookups… er… pairings in the                      (title sponsorship still available) 2014 Pick-Up Golf Pro-Am.

These affable bright-eyed stars are at the same point in their career. He’s a two-time PGA Tour winner poised for a breakout season and she’s a second-generation Hollywood hottie (Don Johnson and Melanie Griffith are her parents and Antonio Banderas is her stepfather), set to play Anastasia Steele in the Fifty Shades of Grey movie, a surefire blockbuster out next year. To keep her in character, Harry should wink at Dakota after a particularly mighty lash off the tee and then insist the model-turned-actress carry his bag. If they hit it off I’m sure a red room could be found on the 19the hole.

She’s the New Girl on TV and he’s new to the PGA Tour, what could be more obvious? Besides, the archetypical manic pixie dream girl is just what this sweet swinging Southern feller needs to lose the rookie yips and manage to hang onto his tour card. Zooey’s big eyes mooning at every perfectly struck parabola will bolster his confidence, and as long as she refrains from giggling at his putts that are left just short of the hole, her perpetual perkiness and uncontainable cutesy energy will elevate Wilcox’s game to the next level.

She’s the youngest artist to top the Billboard chart since Tiffany was touring shopping malls in the late 1980s. He became the youngest winner on the PGA Tour in 82 years (since Ralph Guldahl was lighting up the links) after besting Zach Johnson and David Hearn in a playoff at the John Deere Classic last year. Besides being a pair of early achievers with meteoric ambitions, they’re both unflappable performers who favor substance over flash. But mainly we think her soothing electro-pop will have a calming influence on his short game.

Sergio’s a fire-and-ice kind of player. His game can be cooking with gas for a few holes and then the fire goes out when he splashes one into the drink. Recall the back-to-back dives at the 17th at TPC Sawgrass that took him from tied with Tiger Woods atop the leaderboard to well out of contention. It’s cool though, Katy can relate to his streaky nature. In fact, she wrote a No. 1 song embodying his complicated yo-yo state a few years back called “Hot’n’Cold.” Sure technically the tune is about relationships but why quibble? Besides, Perry tends to go for opinionated men with devilish grins and that’s Garcia to a T. If it doesn’t work out, Perry’s next hit could be “Par of Me.”

You’d think we’d put the pop tart, who once told Conan O’Brian that she has a thing for unassuming shy guys, with Ryo Ishikawa. He’s known as Hanikami Ōji (translates “Bashville Prince”) back in Japan, but alas Ishikawa married his middle school sweetheart last year. While Camilo may not be a shy guy and has a serious girlfriend, Spiderman’s superhuman limberness on the greens makes him the only guy on tour than can contend with Ke$ha’s risqué dance moves.