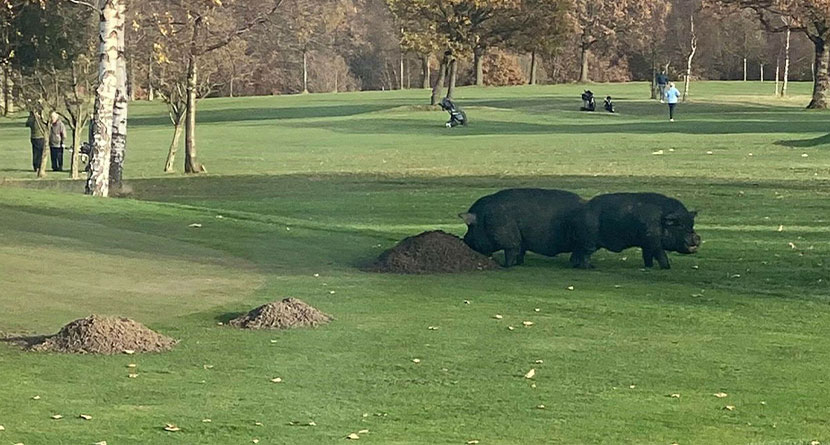 When you hear about an infestation on a golf course, typically it’s geese or deer or some kind of insect or rodent, but for a course in West Yorkshire, England, a pig infestation sent a pair of people to the hospital and forced management to close the course temporarily.

Lightcliffe Golf Club in Calderdale reported two large pigs had made their way onto the property last week and immediately began to cause problems.

“One of our golfers saw these pigs on the course and tried to shoo them off and he sustained a cut on his leg and had to go to (accident and emergency) for a shot,” club president Philip Marshall said. “And they disappeared then, so we thought they’d gone.

“They reappeared (two days), and they dug up the 18th green, the first tee and then our head green’s director tried to shoo one of them off and it turned on him and it cut his leg. So he had to go and have a tetanus jab, but he’s fine.”

Phil assured us it was ‘no porkie’🐷

Neither the golfer nor the greenskeeper who was cut by the pig faced any serious medical issues, but due to the unknown nature of the situation, both required medical attention to prevent against tetanus infections.

With two failed shoo-ers to their credit, the club opted to enlist the help of local law enforcement. However, the police told the club that collecting pigs wasn’t their jurisdiction, so Marshall and the club had to wait for the Royal Society for the Prevention of Cruelty to Animals (RSPCA) to take care of things, which required a few days more.

“They ended up on the side road outside the golf club. They were put in transporters and they were taken away. We don’t know where they’re from or what’s happened to them.”

Not one to miss out on a marketing opportunity, Lightcliffe Golf Club added a nice addition to their greens fee for golfers willing to book on their website.

“Anybody who books online and comes and plays, we’re offering a free bacon sandwich,” Marshall said.