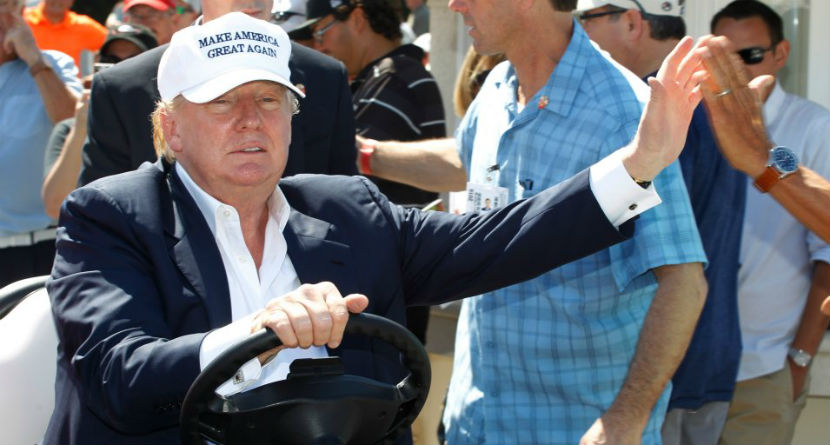 A “tape” of Donald Trump has been leaked of what appears to be the 45th President of the United States driving a golf cart onto a green. As any golfer will tell you, this is a cardinal etiquette sin along the same lines as talking in somebody’s backswing or not replacing a divot. Not only could it damage the course, it disrespects the superintendent.

Here is the clip that spread on social media on Wednesday:

Never drive on the green, unless you own the course or are the most powerful man in the world via:@MikeNFrank pic.twitter.com/0MZ5EL4OJL

The original post from @MikeNFrank stated this was filmed at Trump Bedminster on June 9, according to the NY Daily News, which is the site of next month’s U.S. Women’s Open. It should be noted that the facility contains 36-holes and it isn’t clear which hole the incident occurred on.

Also, while there is no definitive confirmation it was, in fact, the “green” he was driving on, based on the visual evidence, it seems likely it was. Regardless whether you’re riding or using a pushcart, the general rule of thumb is to be no closer than 30 feet away from the putting surface.

“It’s the only place you can drive on the green, right? Your own golf course?” the person filming can be heard saying as Trump approached.

As he passes, he claims his course has “the best security in the history of golf.” When asked how he’s hitting, Trump responds, “Good until this hole.”

While we don’t condone these actions, it must be nice to own your own golf course…and be the leader of the free world.