Trump Tees It Up with Tour Stars for Holiday Round 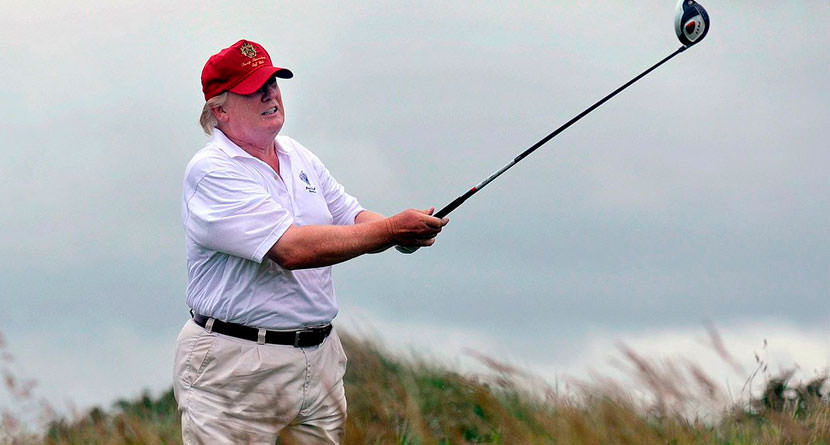 President Donald Trump kicked off his holiday vacation with a pretty star-studded round of golf at Trump International Golf Club in Palm Beach.

Golfweek.com’s Kevin Casey had more information on the holiday round.

Donald Trump is on his holiday vacation in Florida, and the trip includes a round of golf with some serious golfing talent.

Golf Channel’s Will Gray noted Saturday morning that the president was reportedly playing a round with Justin Thomas, Daniel Berger and Jim Herman.

Interesting holiday four-ball going down today in Florida, per source: @realDonaldTrump and @gohermie taking on @JustinThomas34 and @DanielBerger59.

Then, Trump International Golf Club (based in West Palm Beach, Fla.) posted this photo of Thomas and Berger being on the grounds Saturday.

So incredibly #excited to have @justinthomas34 and @db_straitvibin on the grounds today! #TrumpGolf #WeekendVibes #Golf

As it turned out, Trump did indeed engage in a round of golf Saturday with Thomas, Berger and Herman.

Trump played golf today at his club in West Palm Beach with “friends and pro golfers” Justin Thomas, Jim Herman, Daniel Berger and Thomas’ father, according to the White House. The president has no public events scheduled for the rest of today.

The W.H. confirmed that Trump played golf: “President Trump is with friends and pro golfers Jim Herman, Daniel Berger, Justin Thomas and his father. He has no scheduled public events for the afternoon.” https://t.co/DeUHJzTUF8

That’s a pretty nice fivesome. It includes the reigning PGA Tour Player of the Year and the 2015 tour rookie of the year. Herman is a PGA Tour winner himself. He has a special connection to Trump, who helped Herman on his path to pro golf success.