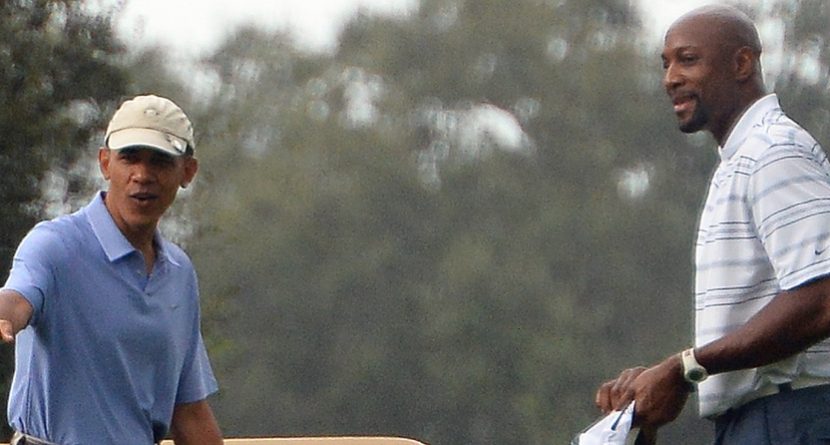 President Barack Obama isn’t nearly as popular as he once was, but he’s still got a big fan in former NBA player Alonzo Mourning. The two met in Davie, Fla., on Saturday for a round of golf that Mourning said was a “dream come true.”

Mourning, who currently works as the vice president of player programs for the Miami Heat and is also a big Democratic fundraiser, was originally going to tee it up with Obama at Martha’s Vineyard over the summer, but it didn’t work out. The POTUS asked Mourning to then choose a course, so he offered up his home course, Turnberry Isle in Aventura, Fla.

“They said that wouldn’t work, because there were too many high-rises,” Mourning told the Sun Sentinel. “The Secret Service asked for somewhere else.”

Grande Oaks Golf Club was deemed worthy. That’s where golf scenes from the original “Caddyshack” movie were filmed. Back in 1980, when the movie was shot, it was known as the Rolling Hills Golf Club. Surely the Secret Service snuffed out any lingering gopher issues.

As for the golf, Mourning said, “Considering everything on his plate, he’s a decent golfer.” He should be, considering all the course time Obama gets. According to the Washington Times, the Grande Oaks round marked No. 150 during his time in the White House (less than five full years) and his 39th round in 2013.

Some passersby caught a glimpse of the president’s swing in 2009: