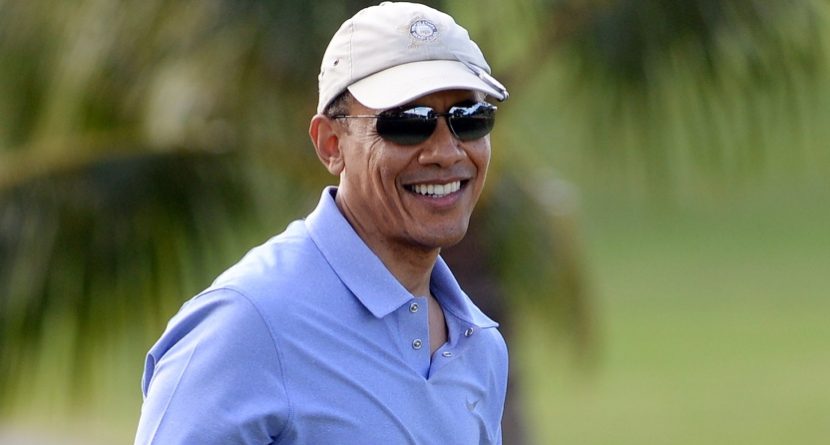 It may be a new year, but that doesn’t mean the “news” is much different.

Loyal readers of the “New York Times” opened their papers this morning and found yet another story about President Barack Obama playing golf. It mentioned that he’s played on seven of his 12 days of vacation in Hawaii, that Republicans think he should spend less time on golf courses, and that he’s far from the only POTUS to take a hearty interest in the game.

Related Link: Presidential Golf Facts You May Not Know

Yet, this story made note of Obama’s slow pace:

Mr. Obama is known for his slow, deliberative play.

On the 18th hole at the Mid Pacific Country Club on Oahu last week, Mr. Obama crouched to survey his final shot, took several practice swings and then putted, with the ball stopping just short of the hole. By the time he had finished, roughly five hours had elapsed since his arrival. (The P.G.A. frowns on slow play, threatening penalties.)

“Six hours is an especially long round of golf, and five is on the long side, too,” said Mr. Van Natta, a former New York Times correspondent.

The Times also posted a video (which is credited to Reuters ) of Obama’s golfing prowess. It showed multiple practice shots accompanied by the noise of dozens of cameras, and the footage was intermingled with some text. The first slide read, “President Obama is an avid, but slow, golfer. He’s been known to spend up to six hours on the links.” After showing some of his putts coming up short, a second slide read, “Part of it is that he’s methodical. Another possible reason? He’s just not that good.”

Seems like a low blow, doesn’t it? You may not agree with everything he does, but the man is one of the busiest in the world. He needs a release just like the next guy, and golf serves that purpose for him. Who cares how good he is at his hobby, or how long it takes?

It’s not like less golf is going to solve the country’s problems.