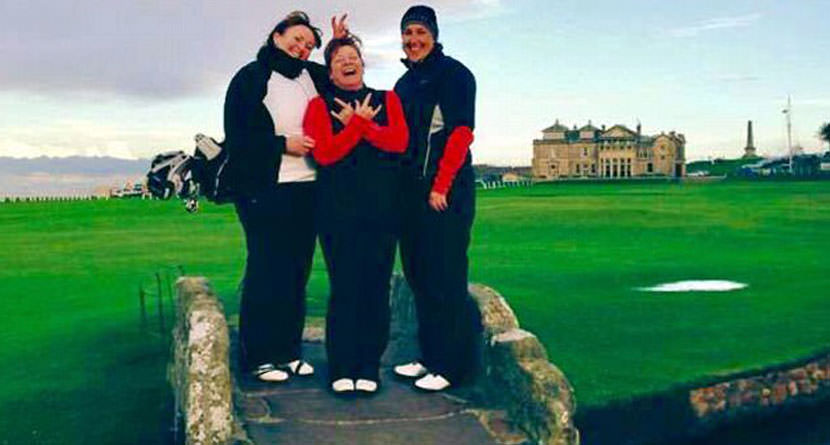 Serving a four-year sentence for tax fraud, Donna Mackay got to tick something off of her bucket list that most golfers wait a lifetime for: she played the Old Course at St. Andrews during a recent day release from jail. As you might expect, Scottish taxpayers aren’t too happy about it.

A U.K. inmate used her “day release” to play The Old Course. Now that’s how you spend your lone day on the outside. https://t.co/mmRr8xaNEH pic.twitter.com/PbVTSPoXV5

The Daily Mail had the story.

An £850,000 tax fraudster has boasted of enjoying trips to top golf courses just months after she was jailed for almost four years.

Donna Mackay and her ex-husband Michael Howard were convicted of orchestrating a massive tax scam while running their multi-million-pound security systems business.

But the 44-year-old has been enjoying rounds of golf less than seven months after she was jailed after being granted day release from prison.

Mackay and her partner operated MDH Ltd from their £400,000 home in Motherwell, Lanarkshire, and spent thousands of pounds on globetrotting and cars before investigators uncovered their wrongdoing.

She was sentenced to three years and nine months behind bars while her former partner was given a three-year term for his role in the scheme in March.

Due to day release privileges, she has been snapped on the world-famous Swilcan Bridge as she played a round at the Old Course in St Andrews, in what she labeled a ‘fantastic experience’.

Conservative MSP Margaret Mitchell said, ‘This woman’s trial would have cost the taxpayer an absolute fortune but people may have felt there was some justice at the end of it. But now we see she is enjoying all the privileges of freedom and using social media to let everyone know about it. There should be an inquiry into this immediately as the public will want to see why in this case it appears that crime does pay.”