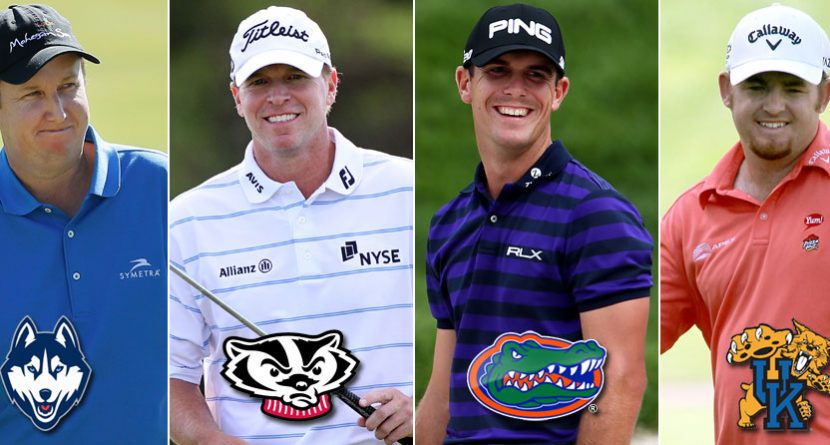 The culmination of the college basketball season is upon us, as the Final Four tips off Saturday in Arlington, Texas, with the NCAA championship game Monday. It’s a Final Four few people picked, but it’s a Final Four full of storied programs.

That means there are large fan bases ecstatic about their team’s surprise (in three of the four cases) run to college basketball’s biggest stage. Not surprisingly, PGA Tour pros are among those supporters:

Florida – Billy Horschel
The Gator grad got quite lucky a few weeks ago. He was in Orlando for the Arnold Palmer Invitational, the same city that just happened to be hosting some early-round games of the NCAA Tournament. The top-seeded team that was slotted for an afternoon game in Orlando? The University of Florida. Horschel and his wife, Brittany, watched the Gators take care of 16th-seeded Albany after he carded a 2-under 70 at Bay Hill. Horschel’s not competing this week at the Shell Houston Open, so he’s got plenty of time to watch hoops.

Lots of Gators colors in the Amway Center. Love it! Thanks @WyndhamGolfGuy for the tickets! @GatorZoneMBK #GoGators pic.twitter.com/EVyd4WfyIw

.@britt_horschel and I getting ready to watch the Gators do work! #GatorBait pic.twitter.com/iD9QvbCO35

Wisconsin – Steve Stricker
Stricker didn’t attend the University of Wisconsin, but he’s a native Wisconsinite and avid Badgers backer. “I wasn’t thinking about not playing (in Houston), but we do have tickets for both Saturday and Monday,” Stricker told reporters Wednesday. “We’ll try to make it up there for sure on Saturday. I figured even if we’re in the last group, … or toward the end, the Badgers are the second game so (we) should be able to make it up there and come back that night.” Despite being a No. 2 seed, Wisconsin wasn’t picked by many to get past Arizona. And Stricker was there last week in Anaheim to see the Badgers advance to their first Final Four since 2000.

Connecticut – J.J. Henry
UConn’s run to the Final Four was a little more surprising, especially considering it almost didn’t get out of the first round. But despite being a No. 7 seed, the Huskies are back in the national semifinals for the fifth time in school history. Connecticut native J.J. Henry couldn’t be more thrilled. He didn’t attend UConn, but instead went to Texas Christian in Fort Worth, Texas, which is just down Interstate 30 from Cowboys Stadium, where the Final Four will be played.

UCONN!!!!! Welcome to North Texas! Just another Final Four for the Huskies!

Kentucky – J.B. Holmes
After breaking his ankle while rollerblading a year ago, UK grad Holmes is back this season and looking for a second top-10 finish. He carded a 66 on Thursday in Houston, setting him up nicely for the weekend, during which he also hopes to see his Wildcats continue their comeback. Always-freshmen-laden Kentucky missed the big dance last year, and got only an eight seed this year. But they beat three teams that played in last year’s Final Four (Wichita State, Louisville, Michigan) to make their third national semifinal appearance in the past four years.