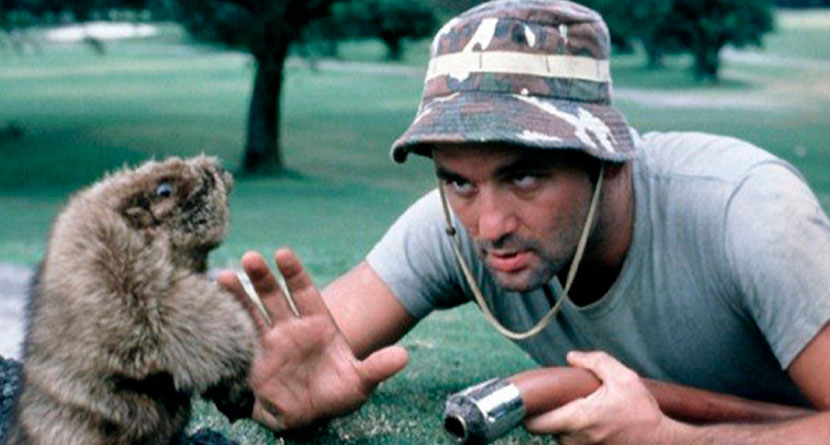 While Caddyshack 2 didn’t exactly live up to the hype of its predecessor, the plot of Caddyshack 3 may have just been written in Wisconsin last week.

The Milwaukee Journal Sentinel reported that a golfer playing at The Golf Club at Camelot in the Town of Lomira was struck by a stray bullet meant for a large rodent wreaking havoc on a nearby homeowner’s property.

A golfer playing a round at a Lomira club was slightly injured when a bullet aimed at a woodchuck ricocheted off trees Monday. https://t.co/ipwRS42C8D

The 80-year-old Fond du Lac was struck in the torso when the bullet meant for a woodchuck — also known as groundhogs — ricocheted off of some trees and headed in his direction.

The man was treated for minor injuries at St. Agnes Hospital in Fond du Lac and released.

According to Dodge County Sheriff Dale Schmidt, the shooter told investigators he was trying to get the woodchuck off his property, but his shot missed and went into some trees. The incident is still under investigation.

Still trying to see if the suspect is named Carl Spackler: Dodge Co. Sheriff says an 80-y/o golfer was shot today (minor injuries) when a homeowner near a #Lomira golf course shot at a woodchuck on his land. Bullet ricocheted, hit the golfer, who was treated and released. #WISN12 pic.twitter.com/hRLePI4jfS

As for the animal on the Lomira man’s property, the sheriff said, “We did not locate the woodchuck.”

Schmidt did not release the names of either the shooter or the golfer, which means that Carl Spackler may still be on the loose.