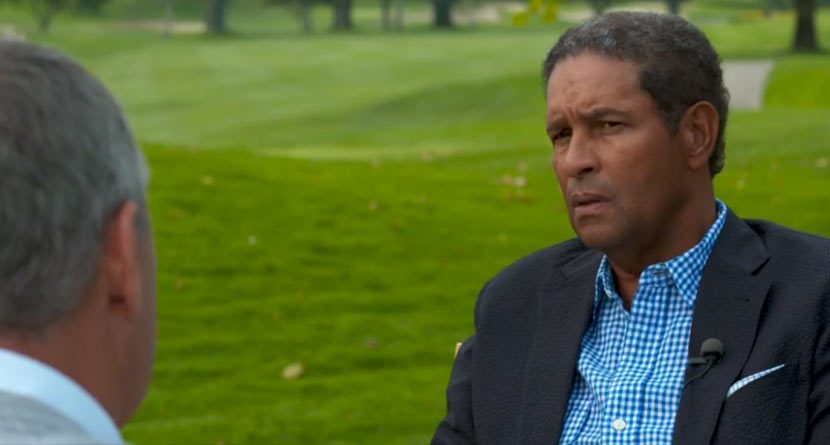 Golf, like a lot of industries, has faced a number of challenges over the past few years.  Innovators like Mark King and Eric Anderson are doing their part to make sure golf doesn’t slide back into the hands of the rich and once again become a game of privilege.

While many point to the pace of play, accessibility, difficulty and the price of the game as the obstacles, some — like Jack Nicklaus — believe the problem lies with those who don’t have the time and dedication necessary to master the game of golf.

Nicklaus, King and Anderson were featured during a segment of HBO’s “Real Sports with Bryant Gumbel” on Tuesday. They discussed the state of the game and their plans to help grow a sport that has seen 130 golf courses close each year for the last eight, TV ratings for the sport’s biggest events decline steadily since 2012, and the game’s retail industry show double-digit losses the last three years, according to Gumbel’s report.

“Young people entering the game after high school, 18-30-year-old kids, [is] down 35% in the last 10 years, so I don’t like where the game looks like it’s going, and it’s not in the right direction,” King said. “I think it’s shrinking to the point where you’re only going have traditional people play. It’s going to be a game for the elite again.”

To keep that from happening, King and Anderson have each played a major role in making the game more “user friendly.”

Anderson is the chairman and lead investor for Topgolf, one of the fastest growing entertainment chains in the nation and bordering on a phenomenon. It’s estimated that 4 million people will play at one of Topgolf’s locations this year. The company already has 13 locations across the country and expects to double that by the end of 2015.

“I think that there has been a lot of demand and pent-up demand to play golf; we know that from our research,” Anderson said. “The challenge has been the barriers to golf can be expensive. It takes a long time, can be a little intimidating, it’s hard — I think we’ve allowed people who aspire to golf to have an easier access point to it.”

Topgolf works because it combines golf, food and music. It’s “part sports bar, part night club,” and the young people the game needs to survive have been flocking to it.

While Topgolf takes players off the course and provides stimulation outside the swinging of a club, HackGolf aims to speed the game up and make it more fun by using 15-inch holes instead of the standard-sized ones. Mark King, the new president of adidas Group North America, has been championing this idea in hopes of fixing golf’s biggest problems — making golf more fun and growing the game.

“Every macro indicator that we’ve been looking at for the past 20 years — rounds played, number of minorities playing, women coming in to the game — all of these things that we’ve tracked says that there’s less people playing and that ones that are playing are playing less frequently,” King said.

According to King, the 15-inch hole will shave an hour off a round of golf and also makes the game more fun by eliminating much of the pain that comes from putting. Some believe the idea is just a fad, but King is passionate and believes that once you try it, you’ll be hooked. TaylorMade-adidas golf has installed the 15-inch cup at more than 100 courses around the country, giving people just that opportunity.

“We’ve now had probably a handful of tournaments,” King said. “Every single time the people will say, ‘That was most fun I’ve ever had playing golf.”‘

For those worrying about the integrity of the game and the notion that golf should be hard, King reiterates that golf is “still frustrating.”

“For all those traditionalists who say the game is fine: If we don’t have kids graduating from high school playing golf, what’s the game going to look like in 20 years?” King asks. “There’s a theme to who’s hanging on to the old, and who’s moving to the new.”

While many are weary and afraid to change, perhaps the most resounding endorsement of ventures aimed at growing the game like Topgolf and Hack Golf comes from Nickalus, who sums up the entire movement perfectly.

“What difference does it make if it brings people in and introduces them to the game?”

Related Link: So How Does Golf’s Future Look Now?