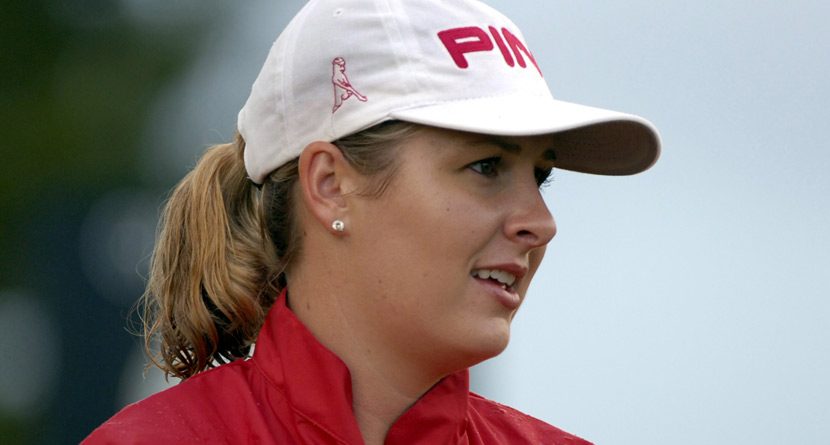 In 2003, Hilary Lunke became the first player to win the U.S. Women’s Open after advancing through local and sectional qualifying rounds. With that win, she secured her spot in golf history.

But that was just the beginning of her journey. In 2007, she had the first of three children, and her life would never be the same. Now, Hilary is a fellow stay-at-home mom of three and lover of the vine. Since neither of us can have an actual phone conversation for more than thirty seconds, we “chatted” about wine via email.

Red Figures: Tell me when about your first experience with wine that had an impact on you? Your “a-ha” moment…

Hilary Lunke: I think it was at some point in college; I was living out in the Bay Area but had basically no experience with wine.

I remember some friends inviting my boyfriend (now husband) and I over for dinner, and they cooked wonderful food and we drank wine. I’m sure up until that point any wine that I had somehow consumed was out of a box or the equivalent, so this was eye-opening to taste how good it could be.

I also remember our first trip to Napa, again during college; that was when I began to see that there was a whole world of wine out there. I think prior to that trip I really only knew there were “red” and “white” wines, and I had no idea about all the varietals. I remember stopping at a restaurant when we first got to Napa and ordering a glass of Zinfandel off the menu expecting it to come and be “pink” like the wine I had seen my mom order once or twice before when I was growing up. I was so proud of myself, thinking I was being really cool to not just say “a glass of white,” but to be so specific.

Never mind the fact that I was being so specific about ordering a generally horrible wine, and that I hadn’t even ordered that. I had ordered a real Zin, ha! I clearly had no idea what I was doing. But by the end of that weekend, I started to understand a bit more about the world of wine, and I had tasted enough great ones to ensure that I’d probably never be ordering, or trying to order, white zinfandel again.

Caveat: I know there are great blush wines out there and I have enjoyed many rosés, so I’m not knocking the pink stuff entirely!

Red Figures: Tell me about one of your favorite experiences with wine. Where, which wine, and with whom?

Lunke: By far my most favorite experience with wine was in 2003 in Denmark. My husband and I had flown there with a group from the LPGA for a practice session for that year’s Solheim Cup nearby in Sweden.

One of the administrators had asked the assistant captain (who is a bit of a foodie) to pick a restaurant for us to go to one night, and she picked a place out of Fodor’s — I wish I could remember the name. None of us, including her, had any idea of what we were about to get into! I think most of us were just expecting a place with a decent plate of food, but nothing very special.

Well when we got there, our table had a tasting menu already laid out for us, no prices, just descriptions of everything we’d be served that night and the wine that would accompany each course. I kid you not, we ended up being there for HOURS, having no fewer than eight courses of food, and the wine that came with each course was not only perfectly paired, but each was served in a different hand-blown glass that was custom designed for that particular wine! It was truly remarkable.

In the end I didn’t qualify for the Solheim team that year, but I’m so glad that I went on that practice session trip because our dinner that night was a memory I’ll have forever. Something else I’ll always remember is the look on the administrator’s face when she got the bill at the end of that night!

Red Figures: That sounds amazing. Is there a region you are really enjoying right now?

Lunke: I recently went to a tasting night at a local restaurant with some friends and they were featuring Malbec which I’ve always enjoyed. They had a nice variety of samplings with the food including a few from Chile which I had never experienced before, so that was fun.

Red Figures: If you could have one red and one white for life, which varieties, or specific wine, would you choose?

Lunke: I used to be a Chardonnay girl, but if I had to pick only one white there’s a decent chance I’d pick Pinot Grigio these days! I find I usually want to drink wine while I’m cooking dinner and that’s always a nice easy choice before a meal. As for red, I used to call Pinot Noir my favorite, but now I tend to like more “off-beat” reds and blends. It would be really hard to pick just one!

Lunke: I don’t know that it’s necessarily a recent discovery, but I’m always amazed by how much I like sweet wine with spicy food.

On its own, I’m not necessarily crazy about a glass of Riesling or Gewurtztraminer, but they are the best for when we order Asian take out! It’s really a great balance of sweet and spicy, and there is crispness to the wine that cuts the greasiness of the food nicely.

As for a pairing that didn’t work, I can’t think of a super specific example, but in general I feel like I need to pay more attention to pairing wine and cheese. When I’m cooking dinner, I’ll sometimes pull out some nice cheese and a few crackers to nibble on while I’m sipping my wine, and, oftentimes, it’ll seem to clash with whatever I’m drinking. In theory it sounds great to just grab some delicious cheese to have with your wine, but many times it seems the cheese overtakes the wine and makes it taste bitter and almost metallic.

Red Figures: So true. Being a fellow stay-at-home mom, I know there are days that simply must end in a glass of wine. What is your go-to “Monday wine” (one you open just any day under $15ish)?

Lunke: Ha! You are so right, wine has never tasted so good as it does at the end of some of my days as a mother!

Honestly, with three little ones right now, I haven’t had enough time to really be shopping around to sample different labels the way I’d like to. These days, I tend to just talk to the guy at Trader Joe’s and have him help me find some great-tasting cheap wines, and I always buy a variety to try.

It really is amazing what great wine you can get under $15 as you said, and it’s easier to just pick up some bottles while I’m grocery shopping versus making a separate trip to the wine shop with the kids, so I do tend to stick to these less-expensive options right now.

I don’t really have a certain “go-to” label. I usually buy more whites than reds, but recently the guy suggested Apothic Red which was inexpensive and very good. I look forward to returning to more detailed wine shopping again someday when my kids are a bit more grown, but for now it’s nice to have easy options that are still quite decent selections!