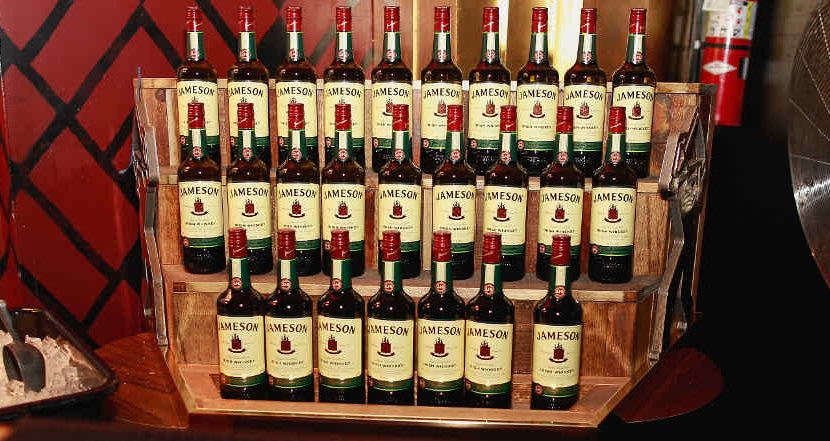 If you prefer to toast St. Patrick with something other than an Irish ale, pour a finger of the island’s finest and your eyes are sure to be smiling.

You would be hard pressed, or should I say “mashed,” to find a spirit more appropriate to pour this weekend than Irish whiskey, specifically the official drink of St. Patrick ’s Day, Jameson Whiskey.

I had the opportunity to talk at length with Peter Bissett, the brand ambassador for Texas, while he poured samples this past weekend. Jameson Whiskey has been producing since 1780. The methods used are still the same today, as their commitment to quality has remained the same. They are currently in the process of doubling production.

Each whiskey is a blend of corn, barley, and malted barley. The corn brings sweetness, the barley gives the spirit spice, and the malted barley is used for creaminess. Each grain is brewed, mashed, fermented, and then triple distilled in the three large copper stills. At that time, the whiskey is somewhere around 180 proof. Deionized water is added to bring the alcohol down to an acceptable level. It then spends its allotted time in barrel maturing.

The whiskey matures in both toasted Sherry and charred American Oak Bourbon barrels. The Bourbon barrels are sourced from the states, the Sherry bottles are a little harder to find. Because the barrels have to ship, in one piece, in winter to prevent spoilage, Jameson produces their own Sherry in Spain just to source the barrels. This extra step ensures Jameson will receive the quality of barrel they want, when they want it. When that process has completed, the whiskey is blended.

Here’s a trio of whiskey choices from Jameson:

If you prefer a single-pot still whiskey, check out Redbreast Whiskey. Unlike single malt, this uses barley and malted barley. Unlike Jameson, there is no use of corn. I sampled both the 12- and 15-year. Both spent time in Sherry and Bourbon barrels and were also triple-distilled. This is the only whiskey of its kind available in the States. I was very fond of the 12 year: more fruit and a creamy, smooth finish.

Whether you’re holding a pint glass or a rocks glass, a snifter or a Dixie cup, raise a toast this weekend to your favorite Irishman. And if you’re in Austin, I’ll see you at the Dog and Duck Pub. I’ll be the one wearing green. Sláinte!