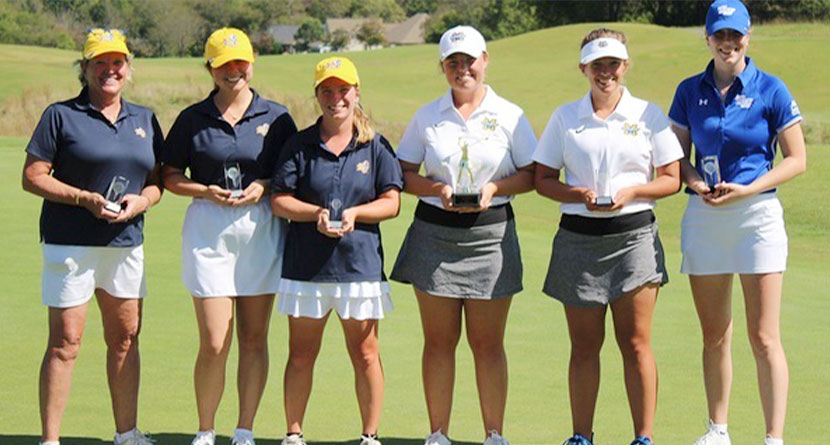 Reinhardt University is a tiny private school in northwestern Georgia with an enrollment of around 1,300 undergraduates. Its athletic programs compete in the National Association of Intercollegiate Athletics, and golf, along with bowling, is one of 10 sports for which the Eagles field a women’s team.

Click on the women’s golf roster on the school’s athletics website, and you still won’t find much out of the ordinary. Six players, all born in-state, comprise the roster.

But that’s where things take an unusual turn. Listed at the top of the roster is a woman named Debbie Blount. You might guess, based on Blount’s photo, that the coach has been mislabeled as a player. But 26-year-old Evan Nichols serves as the Eagles’ coach; Blount — a 63-year-old interdisciplinary studies major who once qualified for the USGA Senior Women’s Amateur — is actually a sophomore making her debut on the squad this fall.

A major hat tip goes out to the Wall Street Journal’s Jason Gay for shining a light on Blount’s story. He profiled Blount in a column published Wednesday, and it’s a testament to perseverance, second chances and the lifelong grip the sport can have on those who play it.

1. At 63 she becomes the first person in her family to attend college, which is a great source of pride to her mother, Loraine, who is 95 years old.

2. She joked that she'd be open to a name image likeness sponsor: arthritis gel.

Blount, who lost her husband, Ben, a couple years ago, became the first member of her family to enroll in college when she first started taking virtual classes at Reinhardt in 2020. Now attending in-person classes three days a week and fitting in seamlessly with her classmates, Blount is proof that it’s never too late to pursue an education — and the game of golf will always happily take you back.

“After my husband passed away, I was getting stale,” Blount told Gay. “I love golf, but I’d lost my passion for it, and I was looking for something fun and different.”

With Nichols at the wheel of the Eagles’ team van, Blount rides to matches along with five teammates who are all more than four decades her junior. While initially skeptical of her inclusion on the Eagles, they now see Blount as a big sister type, her bottomless positivity providing a constant boost.

“I was like, ‘There’s no way they’re putting a 62-year-old on our team,’” one teammate admitted. “I wasn’t upset over it, but I didn’t want our team to be a laughingstock. I didn’t want to be known for that.

“Then I met her, and my whole perspective changed. Seeing her be so appreciative over the little things was a really big eye-opener for me. It was a lot of fun watching her experience it for the first time. I told her: ‘I’m sorry that I was so doubtful of you from the beginning.’ We laugh about it now, but she’s one of my best friends. It’s strange saying that, but I truly mean it.”

The Eagles’ best result thus far was a second-place finish that occurred at the Tennessee Wesleyan University Invitational back on Sept. 26. Blount registered scores of 78 and 84 to finish sixth, earning a spot on the All-Tournament team.