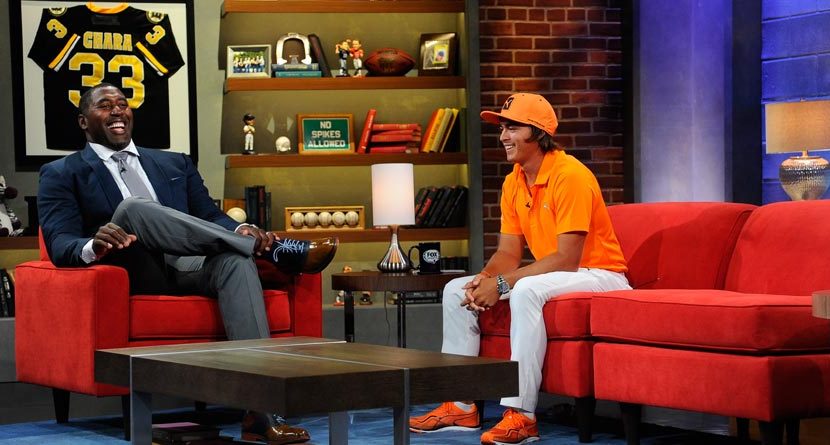 Last night FoxSports 1 – the new 24-hour sports network powered by Fox – debuted their new mini-game show ‘Reach for the Star’ on Crowd Goes Wild. The premise is pretty simple: blindfold a bunch of unsuspecting guests (in this case, Regis Philbin and Terrell Owens), bring out a super secret “mystery guest” and have those blindfolded guess their identity by way of touch.

Sounds like a typical dinner party at my house. But I digress.

Rickie Fowler played the role of the mystery guest this time around while Owens and Philbin gave him a frisking that would make a TSA agent blush. There appeared to be quite a bit of attention paid to Fowler’s golf club, which is a phrase that can be taken in about 30 different contexts.

As you can also see, Regis kind of lost interest halfway through and started walking around like a zombie. That’s comedy gold, folks! I swear it is!

Later, Fowler sat down on the hot seat – or couch – and was drilled by another segment called ‘Questions Out of Left Field’, where he was asked gems like “What is your ATM pin?” and “Do you want a pretzel?”

Perhaps the most interesting golf-related question was when Fowler was asked “Tiger or Phil?” to which he replied in favor of the British Open champion.

Related Links: What It Takes To Win: The Barclays