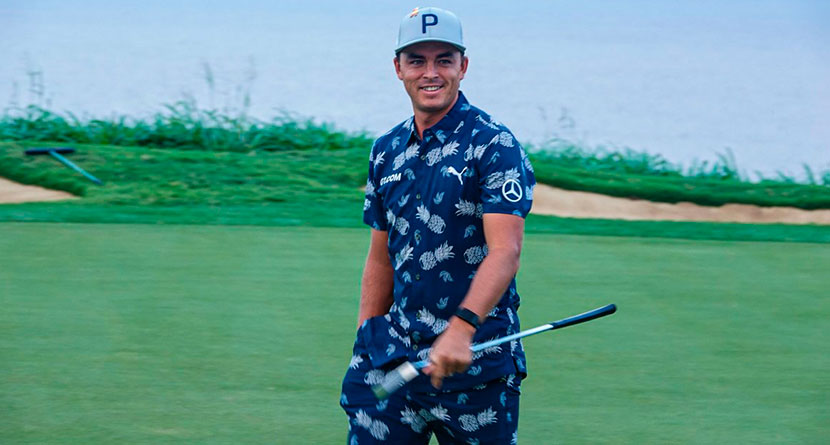 Rickie Fowler famously — or infamously, depending on your Fowler fandom — has won five times on the PGA Tour, first in 2012, twice in 2015, again in 2017 and last year at the Waste Management Phoenix Open.

Each of the three times he has been eligible, Fowler has taken up the invitation to play in the Tournament of Champions in Hawaii to kick off his calendar year schedule, and his main sponsor, Cobra-Puma Golf, has made sure to use Fowler’s presence as a means to bring some new products to market.

Beginning in 2016, Fowler debuted his joggers and high-tops look, and last year, he further ruffled golf traditionalist feather with a more island-themed scripting, dubbed The Aloha Collection. While both were met with some blowback, the sell-out sales of both runs of product said all that Puma needed to hear.

You couldn’t have expected 2020 to come and go without a new line of Puma-made, island-inspired and Fowler-decked clothes, and Rickie didn’t disappoint, introducing The Island Time Collection this week.

The launch, which “features signature prints inspired by the tropical vibes of the Hawaiian Islands,” did its job in terms of turning heads and making Fowler’s outfit a talking point of the first official event of 2020.

Fowler’s game did plenty of talking on Thursday as well as the 31-year-old fired an opening-round 5-under par 68 at the par-73 Plantation Course at Kapalua layout.

After the round, Fowler chatted with Golf Channel’s Todd Lewis to talk about his round and his clothes and told him that he’s not going to be checking social media to see what the blowback of his latest outfit may be.