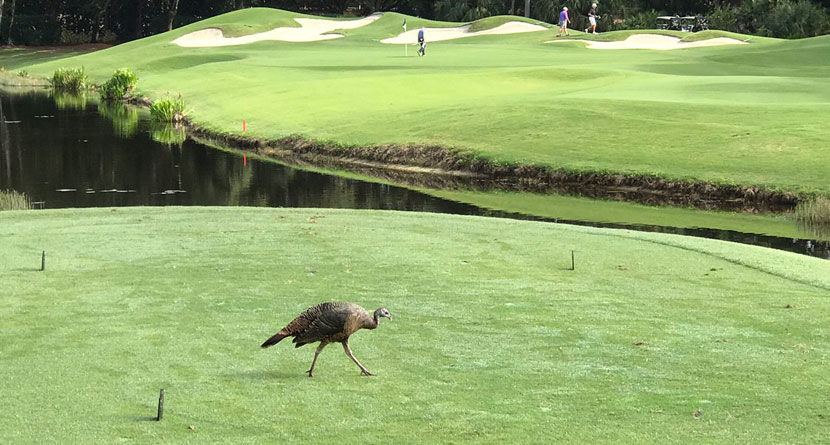 There’s nothing new or exciting about animals taking up residence on a golf course. After all, a wide expanse of land is much more natural to deer, snakes and alligators than it is a group of people chasing a little white ball around.

While multiple species have been able to get along on the course for centuries, a golf course in Canada is having an issue with a new resident. The Elm Ridge Country Club membership near Montreal have been confronted and even attacked by a rogue wild turkey.

As members at the Elm Ridge Country Club in Île-Bizard head out to the course they may be hoping for a birdie, an eagle or even an albatross. But one bird they might not expect to see is a turkey — especially a wild one.

Yet right after Thanksgiving, a wild turkey has been spotted by several members of the club and many have said it is not friendly.

Randy Moncrieff, the general manager of the club said while he personally had not encountered the turkey, members have told him that he is large and fierce.

“My understanding is that there is a male, a very large male and a smaller female,” he said. “And the male has turned into quite the aggressive fellow and actually chases our members. ”

But the biggest problem Moncrieff said is that no one has been able to catch the turkey.

Jonathan Lutter Hoppenheim was on the 15th hole when he saw a small animal in the distance. At first, he thought it was cute, but as he fiddled with his bag he saw the turkey move towards him.

That’s when three things became apparent: this was no small turkey, the animal wasn’t in a good mood and he said “it seemed like it wanted a piece of [him].”

The wild turkey then pursued Lutter Hoppenheim. He said he tried to run and distract the turkey by waving his golf club, but it was both resilient and just as fast as he was.

The golfer then tapped the wild turkey twice, which only seemed to upset it.

“What do I do? Do I hit him?” He asked a friend as he deliberated his next moves.

Lutter Hoppenheim, who describes himself as an animal lover, said he did not want to injure the wild turkey, but while looking at the large claws of the animal, he also feared for his own safety and the safety of older members at the club.

He said he hit the turkey on the side and it backed off.

Barbara Frei, the director of the McGill Bird Observatory, said it is extremely rare to see a wild turkey because they are great at hiding and it is even rarer that a turkey will attack someone.

“It was a turkey who was probably trying to establish dominance or potentially saw the person as a potential predator and was trying to scare it away,” she said.