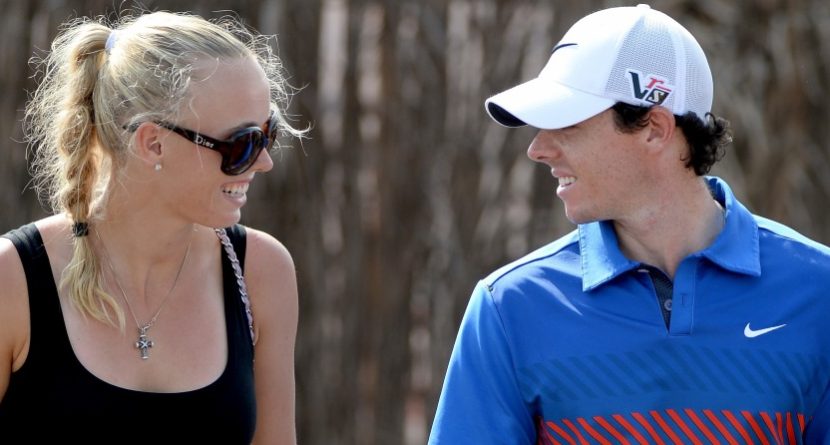 Rory McIlroy and Caroline Wozniacki are done?! We thought they were engaged? Wait, before that we thought they broke up? Who knows. All we can be certain of is where they’ve been, and what they’ve shared with us via social media.

July 2, 2011: Caroline, the world’s No. 1-ranked female tennis player, meets Rory, the world’s third-ranked male golfer, at a boxing match in Germany between David Haye and Wladimir Klitschko. The 22-year-old golfer is just weeks removed from his first major championship at the 2011 U.S. Open.

July 3, 2011: The Week 27 rankings come out in golf, and Rory has slipped to No. 4. The first sign of Caroline not being so sweet for McIlroy’s career?

July 17, 2011: Rory ties for 25th at the Open Championship, his first major since hooking up with Caroline.

Getting some treatment on my arm in the ladies locker room in new haven….. Not a bad place to be 😉 @CaroWozniacki

September 10, 2011: No. 1 Caroline falls to Serena Williams in the semifinals of the U.S. Open, her first Grand Slam event since hooking up with Rory.

September 27, 2011: Rory imprints “Wozzilroy” on a wedge for Caroline:

Here is my new club @McilroyRory made for me. http://t.co/JsJximhT

Hope 2012 is a great year for everyone! RT @CaroWozniacki Happy New Year from @McIlroyRory and me in Thailand:) http://t.co/NsjBFHDH

January 30, 2012: Caroline sinks from No. 1 to No. 4 in the latest WTA rankings after a quarterfinal loss at the Australian Open.

On my way to pick @CaroWozniacki up from the airport. Haven’t seen her in a month! #excited

Hope everyone has a great valentines day! I just had a lovely dinner with my valentine @CaroWozniacki 🙂

July 22, 2012: After a string of missed cuts, including at the U.S. Open in his title defense, Rory ties for 60th at the Open Championship and drops to No. 3 in the world.

August 12, 2012: Rory crushes the field by eight strokes at the PGA Championship, collecting his second career major. He jumps back into the world No. 1 spot.

Awesome to wake up next to this this morning!!! http://t.co/kZJqP0lQ

September 23, 2012: However, Caroline responds with a victory at the Korean Open.

So proud of @CaroWozniacki!! Great win in Korea! Number 19 and counting! #champion #winning

September 30, 2012: Rory defeats Keegan Bradley in his singles match to help Europe stun the U.S. at the 2012 Ryder Cup.

March 24, 2013: Tiger Woods wins the Arnold Palmer Invitational to bump Rory out of the world No. 1 spot.

April 14, 2013: After a runner-up finish at the Valero Texas Open, Rory invites Caroline to caddie for him during the par-3 event at the Masters. The good times had together on the course don’t help Rory’s game, as he ties for 25th later that weekend.

June 3, 2013: Business Insider studies the results of Caroline and Rory in their respective professional tournaments since they began dating, and the findings are not pretty.

July 29, 2013: After Nick Faldo, Jack Nicklaus and Johnny Miller had already opined about Rory’s struggles on the golf course, Gary Player jumps in too, saying, “He’s got to find the right wife.“

August 25, 2013: The first rumors surface of a split between Caroline and Rory.

I’d love to know who this guy source is… Seems to pop up in the papers all the time and is wrong 99.9% of the time!

August 31, 2013: Sixth-seeded Caroline loses in the third round to No. 136 Camila Giorgi at the U.S. Open, completing the major championship season for Wozzilroy with zero wins.

September 16, 2013: Caroline tweets the infamous “jetlag” photo of Rory that leads one Irish newspaper to cite it as the reason for the couple’s latest supposed break-up.

September 27, 2013: For the third time in his career, Rory switches management companies. This time, he starts his own.

October 14, 2013: After the Irish Independent reports a break-up, Caroline tells a Danish newspaper that the rumors are not true. As of now, she and Rory are still a couple. Rory is ranked No. 6 in the world, Caroline is No. 9.

October 16, 2013: Despite no public word from Rory on the status of their relationship, Caroline heads out to a driving range to work on her golf game.

Hitting balls in the chilly weather outside! #golf #determination pic.twitter.com/lg32LGt3Kz

October 20, 2013: Caroline wins the Luxembourg Open for her 21st career WTA title. Rory sends out his first tweet regarding Caroline since the split rumors resurfaced, congratulating her with the hashtag #mygirl.

November 14, 2013: Caroline meets up with Rory in Dubai while he’s there to play in the DP World Tour Championship. She tweets a picture of the golfer playing tennis, and later is spotted walking the golf course with her man.

Feels good to get back at it! Even @McIlroyRory put some good work in pic.twitter.com/xShyMGF9hA

December 31, 2013/January 1, 2014: In Australia for New Year’s, Rory proposes to Caroline. Does this mean they’re going to be together for awhile?

Happy New Year everyone! I have a feeling it’s going to be a great year!! My first victory of 2014 #shesaidyes!! pic.twitter.com/gxO7rDDyPY

February 20, 2014: Caroline reveals that the couple has set a wedding date … but she won’t reveal when that date is. Soon thereafter, reports swirl that the big day will take place in New York City.

April 9, 2014: Caroline caddies for Rory at the Masters Par-3 Contest … with pink hair!

Had a blast at the par 3 tourney today at Augusta! Here’s right before @CaroWozniacki held a 30ft downhiller on 9!! pic.twitter.com/vfrDhGzQZA

May 15, 2014: That annoying Irish Independent claims that the Wozilroy wedding will go down in August. Rory debunks the myth quickly:

I see the @Independent_ie have got it wrong…. AGAIN!!! If they keep plucking dates from the sky they’ll get it right eventually haha!

May 21, 2014: Shockingly, the relationship comes to a quick close when Rory calls off the engagement after sending out wedding invitations to guests, saying he “wasn’t ready for all that marriage entails.”

This relationship has had its share of ups and downs (real or imagined), but we did not see that coming. Is this really the end?