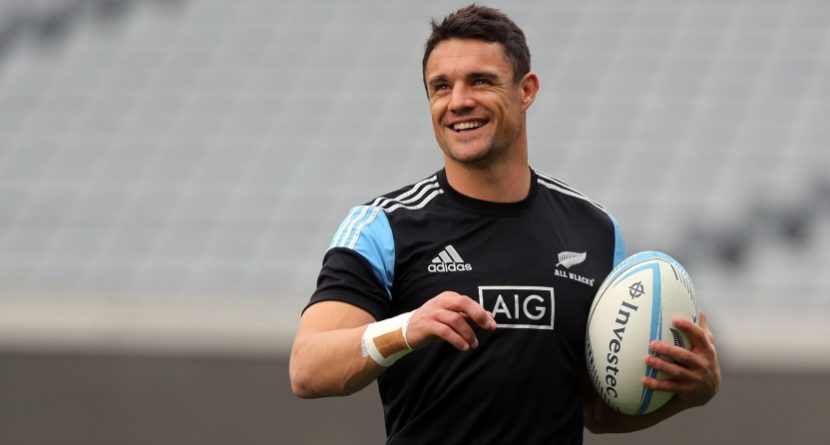 Spending a bit of downtime traveling the world, New Zealand rugby star Dan Carter has ventured over to Augusta National to take in the Masters. As is typical for a man in his sport, Carter made his way to the gym Monday, where he ran into another sporting legend: Rory McIlroy.

Just a former golf world No. 1 with arguably the best player on the world’s best rugby team.

Not a bad bloke to run into at the gym today. Good luck this week @McIlroyRory #Masters2014 pic.twitter.com/OxuJexMro9

We’re assuming McIlroy was about done with his workout.

Anyway, Carter stars for the All Blacks, which is New Zealand’s national rugby union squad and the reigning world champions. You know, the guys who do the haka (Carter is No. 10):

Carter is a fly-half, which is sort of like a basketball point guard in that he’s crucial in passing and directing the team, and he’s also the squad’s goal kicker. In those roles he’s become the all-time leading international scorer, having amassed 1,440 points over 100 matches in his career, nearly 200 points more than England’s Jonny Wilkinson.

And Carter is also a golf fan. He made his way onto a course while in Hong Kong a couple weeks ago:

Hacking my way around the course here in Hong Kong with the @AIG_Rugby crew pic.twitter.com/ELLQ1CWgMn

Other stops over the past month in the jet-setting life of Carter: Melbourne, Australia; Kuala Lumpur, Malaysia; Macau, China; and New York City. Life is tough.