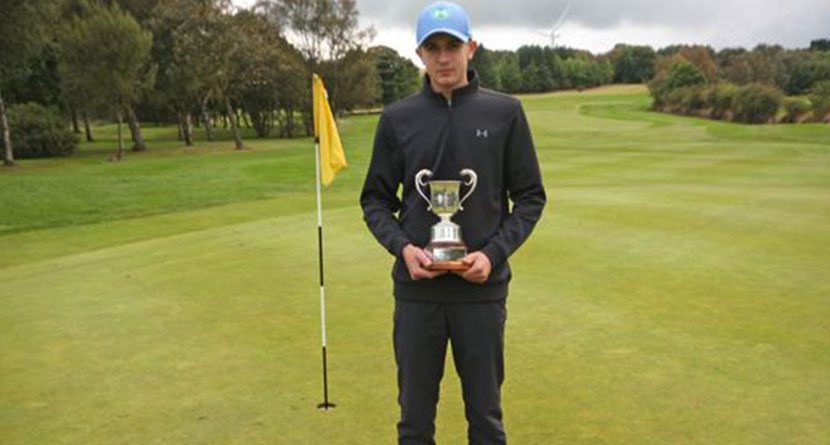 Getting docked a stroke or two because of ignorance of the rules is never an easy pill to swallow, but for junior golfer Josh Hogarth of Stanley, County Durham, England, his non-penalty was especially brutal.

The Chronicle Live set the scene:

A 15-year-old schoolboy has missed out on setting a course record at South Moor Golf Club because of a rules mistake.

Josh completed his victory in the club tournament with a seven-under-par second round of 65 which contained 10 birdies and three bogeys. The drama arrived at the longest and hardest par three on the course, the 186-yard 14th. His perfectly flighted six-iron shot from the tee ended with the ball coming to rest lodged in the hole against the flag stick.

What happened next prevented Josh going on to set an outright course record of 64.

“If I had known the rules, it would have been a hole in one,” said Josh, a pupil at North Durham Academy in Stanley. “I thought you had to pull the flagstick out keeping it directly upright. When I did that, the ball squirted out and ended up an inch from the hole.”

Hogarth’s misunderstanding of Rule 17-4 cost him an ace and the outright course record. Here’s how the rule reads:

When a player’s ball rests against the flagstick in the hole and the ball is not holed, the player or another person authorized by him may move or remove the flagstick, and if the ball falls into the hole, the player is deemed to have holed out with his last stroke; otherwise, the ball, if moved, must be placed on the lip of the hole, without penalty.

Thinking he had to pull straight up on the flagstick with his ball lodged inside the hole between the edge of the cup and the stick, Hogarth’s ball popped of the hole. In reality, Hogarth would have been well within his rights to wiggle the flagstick or tilt it to the side to allow the ball to fall into the cup, thus giving him the ace and the course record.

Instead, he was forced to tap in for his two and sign for a 65. At 15 years old, there are harsher lessons to be learned, especially when you’re firing 65 in tournaments and setting course records, but that one surely stings a bit.

Have a rules question you want answered and explained? Tweet @Wrong_Fairway with the hashtag #RulesJunkie or email your question to chris@swingbyswing.com and you could see your question answered in the Rules Junkie column.

Rules Junkie: One Vs. Two Best-Ball At International Crown