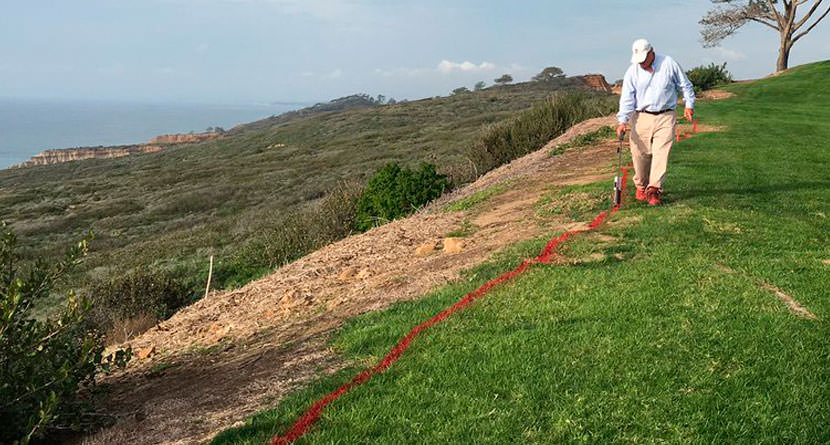 One of the more important things that the PGA Head Professional must do prior to conducting an event at his or her facility is to inspect the course and make sure that it is properly defined. The PGA Head Professional, who fails in this responsibility, may very well find himself or herself facing an embarrassing predicament of having to penalize a player who, but for the inaccurate or incomplete course marking, would not have incurred the penalty! The responsibility to define the course is clearly set forth in Rule 33-2a [Defining Bounds and Margins] which states,

The Committee must define accurately:

(iii)  ground under repair, and

(iv)  obstructions and integral parts of the course.

Let’s begin this discussion with a couple of “defining moments” pertaining to establishing the course boundary. As you know, the vast majority of out of bounds is defined by using white stakes.  It is important to make sure that the direct line between adjacent stakes is free from any undergrowth that would make it difficult to determine whether or not a ball is in bounds. It is also important to inspect the course boundary on a regular basis to make sure that none of the out of bounds stakes has gone missing.

Decision 33-2a/19 [Boundary Altered by Unauthorized Removal of Boundary Stake] presents the situation involving a missing boundary stake during a tournament. As a result, some players played from an area that was actually out of bounds, whereas other players recognized that the area was out of bounds and proceeded under penalty of stroke and distance. This Decision advises that, if the inconsistent treatment of the area could significantly affect the result of the competition, then the entire round should be canceled and replayed!

Decision 26/2 [Ball Within Natural Margin of Water Hazard But Outside Stakes Defining Margin] describes a situation in which the stakes defining the margin of a water hazard were improperly installed, i.e., they were below the natural boundaries of the water hazard. However, a player’s ball came to rest in water within the water hazard that was outside of the stakes. As a result, a player mistakenly assumed that his ball was in casual water, and incorrectly took relief under Rule 25-1 [Abnormal Ground Conditions] when he should have proceeded under Rule 26-1 [Relief for Ball in Water Hazard], thereby playing from a wrong place. Another “defining moment” is to take into account any tall plants when establishing the margins of water hazards. If you position the margin too close to tall plants within the hazard, you could very well be forcing the player to contend with a restricted backswing (see adjacent photograph), in addition to the player incurring a one-stroke penalty for taking relief from the hazard.

Normally, you would not give any thought to defining your putting greens, would you? After all, by Definition, “The “putting green” is all ground of the hole being played that is specially prepared for putting or otherwise defined as such by the Committee.”However, course designers sometimes want the height of the grass on the fringe to be virtually the same height of the grass on the putting green! This can be penalizing to a player who concludes that his or her ball is on the putting green when, in fact, it is not.

This exact situation occurred during the first round of the 2017 KB Financial Star Championship held at the Black Stone Golf Club near Icheon, South Korea. This event is one of the Korean Ladies Professional Golf Association’s major championships. Two players, one of whom was the first-round leader, were penalized for incorrectly marking and lifting their balls, when they mistakenly thought that their balls were on the putting green.  When it was subsequently determined that four other players had made the same mistake, the Committee decided to rescind the penalties already imposed on the first two players, and to not apply any penalties to the other four players due to the “ambiguous” boundaries between the fringe and the greens on the course. This decision led to a total uproar among the field of players such that the Committee decided to cancel all scores of the first round and reduce the event to a 54-hole competition!

This unfortunate dilemma could have been avoided had there been a “defining moment” of simply using small, blue dots of paint to effectively outline the boundaries of the putting greens.