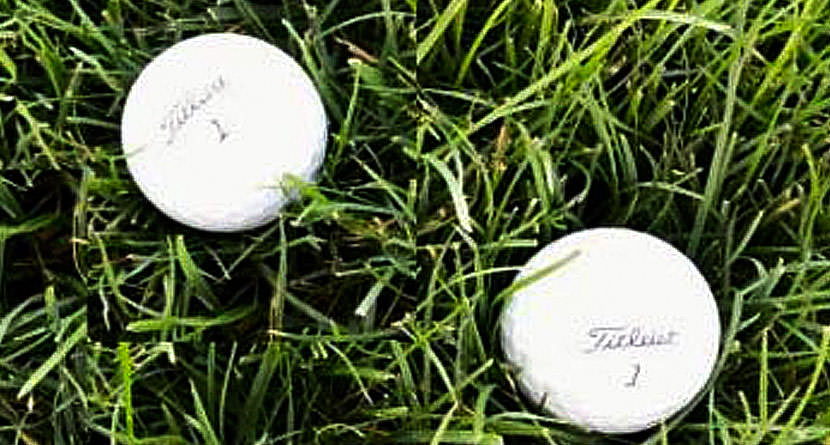 “The responsibility for playing the proper ball rests with the player. Each player should put an identification mark on his ball.” These two sentences, word for word, show up twice within the Rules, i.e., in Rule 6-5 [Ball] and again in Rule 12-2 [Lifting Ball for Identification]. Since the Rules repeat this admonition, it is recommended that you take this advice to heart!

The Definition of “Lost Ball” and Rule 27-1c [Ball Not Found Within Five Minutes] set the stage for why it is beneficial to mark your golf ball for identification purposes. This Definition states, in part, “A ball is deemed “lost” if …[i]t is not found or identified as his by the player within five minutes after the player’s side or his or their caddies have begun to search for it ….”

Rule 27-1 points out that the player whose ball is lost incurs a one-stroke penalty and must play a ball as nearly as possible at the spot from which the original ball was last played. Rule 15-3 [Wrong Ball] is also relevant because playing someone else’s ball by mistake is a loss of hole penalty in match play or a two-stroke penalty in stroke play.

Decision 12-2/1 [Identifying Ball by Brand, Model and Number Only] indicates that it is not wise to rely solely on the brand, model and number of your ball for identification purposes. If your ball, without any added identification marks, ends up in the rough, you then run the risk of playing a stray ball of the same brand and model and having the same number as your ball by mistake. If that were to happen, you would be subject to the penalty for playing a wrong ball!

A classic example of identity crisis on the golf course would be a situation involving two players who are not aware until it is too late that they are playing identical balls without any additional identification markings. Imagine two players bombing career drives over trees, cutting the corner of a dogleg par-5. As they come around the corner, they are both thrilled to see two balls side by side in the middle of the fairway only 120 yards from the green. However, when they reach their balls, they notice that both balls are Titleist Pro V1’s with the number 1, without any additional markings.

Both players must then endure the agony of having to return to the tee to play under penalty of stroke and distance. As discussed in Decision 27/10 [Player Unable to Distinguish His Ball from Another Ball], the ruling in this unfortunate case is that both balls are lost because neither player is able to identify his ball!

You may suffer from identity crisis on the golf course if you play a provisional ball that you cannot distinguish from your original ball. Decision 27/11 [Provisional Ball Not Distinguishable friom Original Ball] prescribes the rulings for the following four situations:

– One ball is found in a water hazard and the other ball is not found. Ruling: The ball that was found must be presumed to be the provisional ball.

– One ball is found in bounds and the other ball is lost or is out of bounds. Ruling: The ball in bounds must be presumed to be the provisional ball.

– Both balls are found in bounds, whether in a playable or an unplayable lie, and (1) one ball is in a water hazard and the other is not, or (2) both balls lie through the green or in a bunker. Ruling: The player must select one of the balls, treat it as his provisional ball and abandon the other.