Who Plays First When Two Players Hit in a Hazard? 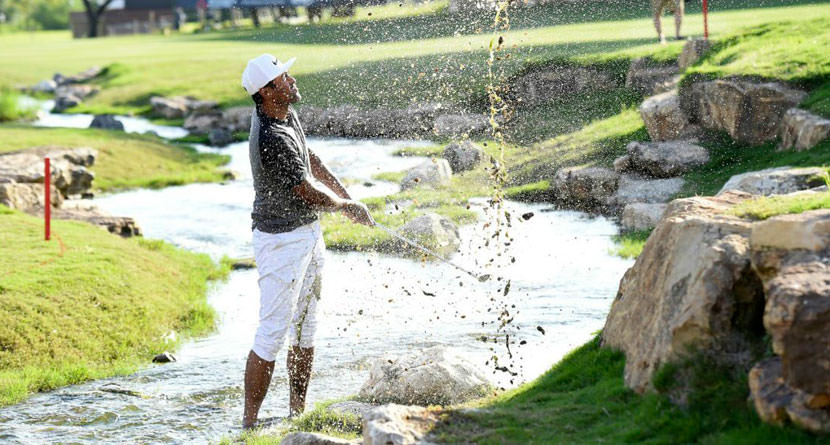 Lou Abbot’s and Bud Costello’s “Who’s on First” sketch from the mid-1930’s is arguably the most famous comedy routine of all time.  The premise of the bit is that Abbott is trying to help Costello sort out the nicknames and positions of the players on a baseball team.  However, this task becomes virtually impossible for Costello given that the nicknames of the players are Who, What, I Don’t Know, Why, Because, Tomorrow, Today, and I Don’t Give a Darn.  If you are ever in need of a good laugh, you can find several versions of their classic routine on youtube.com.

The golfing version of “Who’s on First” might be “Who Plays First” wherein a spectator is trying to get a Rules Official to help him understand which player is to first to play after the tee shots of both players end up in a lateral water hazard.  Consider the diagram and the relative positions of the balls of Who and What in the hazard.  After Who indicates that he intends to drop a ball within two club-lengths of where his original ball last crossed the margin of the hazard, and What indicates that he will return to the teeing ground, we overhear the following conversation:

Spectator:  So, who plays first?

Rules Official: The one whose ball in the water hazard that is farther from the hole.

Spectator: Wait a minute, all I’m trying to find out is what’s the guy’s name playing first.

Rules Official:  Oh, no, no.  What plays second because his ball in the water hazard is nearer the hole!

Spectator:  I’m not asking you who plays second.

Rules Official:  What plays second and Who plays first!

Rule 10 [Order of Play] is applicable, and is bifurcated into two parts, one for match play and another part for stroke play.  Rule 10-1b [Match Play: During Play of Hole] states, “After both players have started play of the hole, the ball farther from the hole is played first.  If the balls are equidistant from the hole or their positions relative to the hole are not determinable, the ball to be played first should be decided by lot.”

Rule 10-2b [Stroke Play: During Play of Hole] is very similar, reading as follows: “After the competitors have started play of the hole, the ball farthest from the hole is played first.  If two or more balls are equidistant from the hole or their positions relative to the hole are not determinable, the ball to be played first should be decided by lot.”

Decision 10/2 [Order of Play When Two Balls Lie in a Water Hazard and Both Players Take Relief] points out that the relative positions of where the balls last crossed the margin of the hazard do not matter when determining who plays first.  Referring to the adjacent diagram, since Who’s ball lies farther from the hole, Who should play first.  It does not matter that What’s ball last crossed the margin of the lateral water hazard farther from the hole.

Decision 10/1 [Order of Play When Two Balls Lie in Ground Under Repair and Both Players Take Relief] advises that the order of play is determined by the relative positions of the balls before relief is taken, not after relief is taken.  So, back to the diagram, even though What intends to return to the teeing ground, which is farther from the hole than where Who will end up dropping and playing his ball, the correct order of play is for Who to play first since his ball ended up farther from the hole.

Remember that there is no penalty in stroke play for playing out of turn.  See Rule 10-2c [Stroke Play: Playing Out of Turn].  In match play, there is no penalty, but if someone plays out of turn, his or her opponent has the option of requiring the player to cancel the stroke and then play in correct order.  See Rule 10-1c [Match Play: Playing Out of Turn].