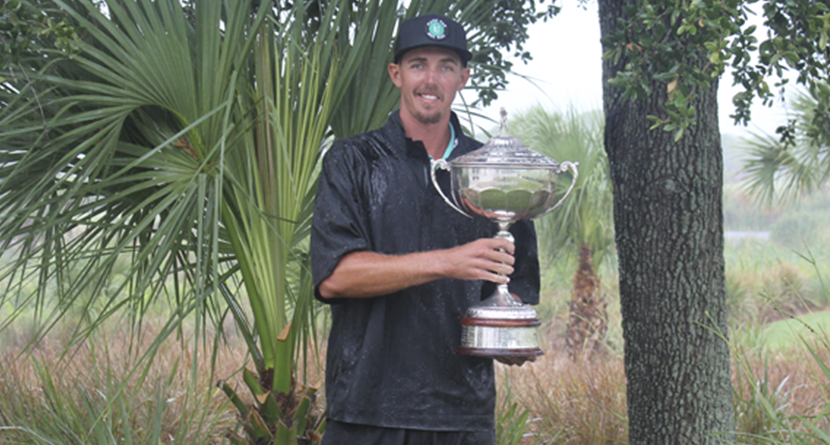 A rules violation during the Florida Mid-Amateur championship match turned into an alleged parking lot assault from a caddie, a strong denial, police activity, and eventually a withdrawal from one of the competitors despite being even through 16 holes.

Marc Dull won the Florida Mid on May 13th after his opponent, Jeff Golden, withdrew at the completion of a 2-1/2 hour rain delay for an “unfortunate injury” at Coral Creek Country Club in Placida, Florida. That’s the news from the Florida State Golf Association website.

There was so much more to what happened at the end of the tournament, however, including Golden’s “unfortunate injury.”

Golf Channel’s Ryan Lavner got to the bottom of the story, and what a story it is.

According to the police report, Golden called the police during a 2 1/2 hour rain delay at Coral Creel Club and alleged that Dull’s caddie, Brandon Hibbs, sucker-punched him in the face in the parking lot. The match was suspended through 16 holes due to rain and was set to resume. After the incident, Golden withdrew.

What would bring about that violence? In golf, that can only mean a violation of etiquette.

The genesis of the dispute goes back to the ninth hole when Golden asked Dull whether the cup was damaged or if there was loose debris around the hole. According to the GolfChannel.com report, Hibbs stepped in an told Golden, “Don’t worry about it. If you’re going to make it, you’re going around.”

Golden, unhappy with the perceived breaches of etiquette earlier in the match, informed a rules official he believed the comment constituted advice. Golden was awarded the hole and was two-up at the turn. Hibbs walked off the course after the violation.

After 16 holes, the match was halted for rain and Dull and Golden retreated to the clubhouse. That’s when, according to the report, Hibbs approached him in the parking lot. Hibbs apologized to Golden and then, allegedly, punched him in the face sending him to the ground. Golden explained to Golf Channel what happened.

“I had a moment where I was happy to see (Hibbs, the caddie), because the first thing he said to me was, ‘I want to apologize,’” Golden said. “By the time he finished, I was being punched.”

Golden claimed he was dizzy and had concussion-like symptoms after the incident, forcing him to withdraw.

A clear-cut assault and a police report. If only it were that simple.

Hibbs, in a statement to police, denied every detail of the incident and said he was never in the parking lot and did not assault Golden. There were no witnesses and no surveillance view of the parking lot. Hibbs also stated that he was in the clubhouse the entire time.

Police found that there was some redness inside Golden’s lip, but no evidence of “swelling or abrasions on the face.” Hibbs’ hands and fists showed “no scrapes or abrasions” either.

Dull said he had no knowledge of the attack and told Golf Channel, Hibbs denied involvement.

Golden decided to not press charges and then asked Dull to concede. Dull refused and instead, Golden withdrew.

The entire incident didn’t sit well with Golden. He is currently a tennis pro in St. Augustine and once qualified for the 2007 U. S. Open. He has appealed the FSGA’s decision saying that officials shouldn’t have accepted the resignation.

Dull also is miffed, telling Golf Channel that he is “annoyed” by the incident and that “no golf tournament should end that way.”