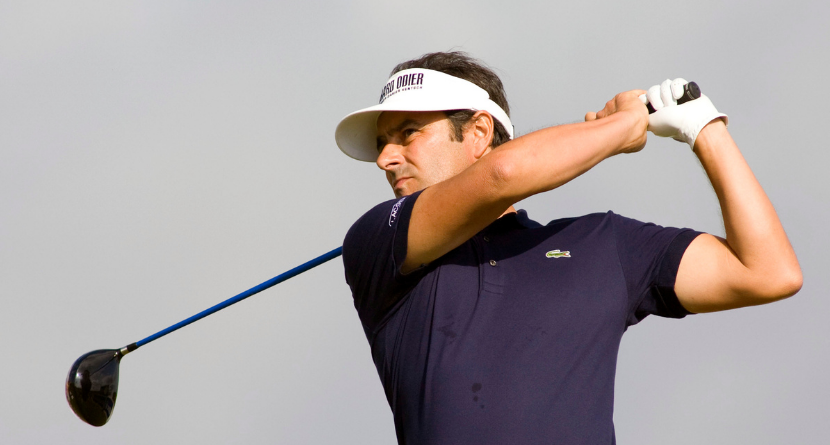 Professional golf and campy slasher films share little on the surface. But there’s a theatricality to a Sunday finish — particularly when one or more competitors are stumbling toward their inevitable demise — that can lend a gruesome, watch-through-your-fingers air to the proceedings.

With the spooky season in full swing, it’s worth dusting off a few of golf’s enduring horror stories. These creepy tales are passed on from generation to generation. But unlike the urban legends we tell around the campfire or the beloved horror movie franchises we revisit every October, these really happened. In some cases, the victims never recovered. We can’t help but shudder when we speak their names.

So grab a flashlight, gather up your golf buddies and get ready to regale them with five scary golf stories to tell in the dark:

The Shark Sinks At Augusta

It’s really not much of a stretch to put Greg Norman’s epic Sunday meltdown in the 1996 Masters in the horror genre. In fact, in his iconic recap for Sports Illustrated, Rick Reilly detailed how Norman’s daughter, Morgan-Leigh, had held her breath as she passed a graveyard prior to the start of the tournament in the hopes of reversing her father’s tortured history there, only to become “another mourner in a green-carpeted funeral procession, a red-eyed witness to the blackest golfing day of her father’s life, the day he somehow spent all six of those shots and five more besides, stilled 50,000 people and turned a glorious spring afternoon at the Masters into a 4 1/2-hour cringe.” Eat your heart out, Stephen King.

Shark tanking! @AP asked a panel of golf writers for their top Masters moments and coming in at No. 5 was Greg Norman’s historic collapse in 1996 that helped Nick Faldo win the green jacket.

Beloved scary movies are not without their tropes. And one of the most common is the fatal unforced error: taking refuge in the wrong house in the wrong neighborhood, leaving butcher’s knives and other stabbing implements lying around, going in for a closer examination of peculiar sights and sounds, etc. Along those lines, Phil Mickelson had no one to blame but himself when he squandered perhaps his best chance at finally capturing the U.S. Open at Winged Foot in 2006.

Needing par to nip clubhouse leader Geoff Ogilvy by a stroke in an especially gory edition of our national championship, Lefty pulled driver and lost his tee ball way left. He proceeded to exude the kind of reckless bravado that makes one an early victim of Jason Voorhees or Michael Myers, attempting a miraculous recovery shot that hardly improved his predicament. Mickelson ultimately carded a double-bogey 6 to miss a playoff by a shot. He went on to issue one of the rawest and most revealing quotes from a broken golfer in a post-round press conference. “I still am in shock that I did that,” Mickelson said. “I am such an idiot.” A lot of dead summer camp counselors would say the same if they could.

A Massacre At Medinah

Sunday singles matches in the Ryder Cup are made for drama. It’s one on one. There’s nowhere to hide. If the first two days of the event yield a fair fight, and both sides are reasonably positioned to claim the Cup, each singles match is rife with tension as the combatants pursue a crucial point. But that wasn’t quite the outlook on Sunday in 2012, when the Americans held a 10-6 lead at Medinah (Ill.) Country Club and needed to grind out just 4 ½ points to win on behalf of Captain Davis Love III. However, it was soon apparent that the Euros — captained by José María Olazábal and guided in spirit by his late mentor, Seve Ballesteros — were very much in the fight.

The visitors would dismantle their hosts in a march to a 14 ½- 13 ½ victory that somehow felt as steady and certain as it did sudden and cruel. Short American putts lipped out while European tries of great lengths curled into the cup. Star performers for Love’s squad were felled by lesser names sent out by Olazábal. And all the while Ian Poulter — now cemented as an American tormenter for the ages — pounded his chest and bugged out his eyes, supplying nightmare fuel that still hasn’t faded. The grim count for the final session: Euros 8 ½, USA 3 ½.

Champion Golfer Of The Year . . . Nevermore

Sometimes a loss is so legendary you need only utter a couple of words to conjure up visions of the carnage. In this case, we need three: van de Velde. As in Jean van de Velde, the mysterious French journeyman whose calamitous stopover at the 72nd hole of the 1999 Open Championship at Carnoustie still tingles the spine. Born in Mont-de-Marsan, Landes, France — seriously, doesn’t this guy sound like an Edgar Allen Poe character? — van de Velde was the 152nd-ranked player in the world when he stepped to the 18th tee with a three-shot lead and a chance to secure the first major championship for his homeland in 92 years.

But from the brink of a breakthrough van de Velde would find himself immortalized for all the wrong reasons, scattering shots and articles of clothing all over the Car-nasty terrain en route to a triple-bogey 7 that needs to be seen to be believed. The collapse was not complete until after Paul Lawrie bested van de Velde and Justin Leonard in a four-hole playoff. But for all intents and purposes, van de Velde became a symbol of sports tragedy over the course of those seven fateful shots.

Try as we might, it’s hard to improve on the classics. Alfred Hitchcock’s “Psycho” terrified audiences and turned the thriller genre upside down in 1960. It’s still quite effective and often imitated. Likewise, Arnold Palmer might’ve submitted golf’s horror masterpiece in 1966 when he surrendered a 7-shot advantage to Billy Casper (the ghost jokes write themselves) with nine holes to play in the U.S. Open at Olympic Club, eventually losing in an 18-hole Monday playoff. So accustomed to playing the role of predator rather than prey, Palmer committed miscue after miscue while Casper kept trudging forward like a masked killer to record a back-nine 32. Powerless to stop the bleeding on the course, Palmer also fell victim to an unfathomable development outside the ropes — the crowd began to offer full-throated support of Casper’s comeback. For decades to come, onlookers would be haunted by vivid memories of Arnie’s grisly undoing. “It was a very sad day,” Rita Douglas told ESPN.com’s Ian O’Connor in 2012. “I’m 94 now, so old and yet I remember every minute of it.”