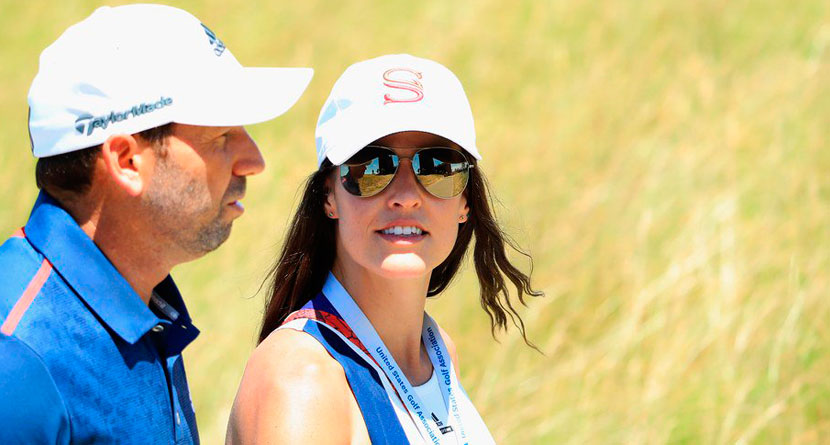 The overriding story through 36 holes of the 2018 Masters is Sergio Garcia’s record-setting octuple-bogey 13 on the 15th hole at Augusta National. Ultimately, the 8-over par hole doomed Garcia’s chances of playing the weekend in his first major championship title defense, but it was some off-the-course controversy that has also kept the blow-up hole in the news.

Reacting on Twitter during the round, Golf Channel host Rich Lerner crafted up a tweet that was a play on Garcia’s newborn daughter’s name. Sergio and Angela Garcia named their daughter Azalea after the name of the 13th hole at Augusta National Golf Club. Sergio’s unlikely par save on the hole in the 2017 Masters catapulted him to his maiden major victory.

Lerner tweeted, tongue firmly in cheek, that after his 13 on the 15th, the hole name, Firethorn, would likely not be on the Garcia’s name list for their second child.

Sergio won’t be naming his next kid Firethorn.

Sergio’s wife, Angela, did not take kindly to Lerner’s tweet, a former colleague of hers when she worked at Golf Channel.

Hey @RichLernerGC, the next time you decide to tweet about my future child why don’t you use your brain and not do it? Don’t be an idiot. @GolfChannel https://t.co/Y4kHNZjDjv

The tweet from Akins resulted in a quick apology from Lerner and an acceptance from Angela.

My apologies to Angela and Sergio for my poorly timed attempt to lighten the mood. Missed the mark with a flippant comment. No ill intent.

Thank you for your apology, @RichLernerGC. I always appreciate a good sense of humor and a good joke, but when you reference a player’s family it’s not appropriate. If people really thought about it they might agree. All good and we can move on. https://t.co/sSxjwUnevu

Following Friday’s second round, 6-over par  78, Garcia missed the cut by 10 shots. He will remain in Augusta through the weekend to award the 2018 Masters winner their green jacket.