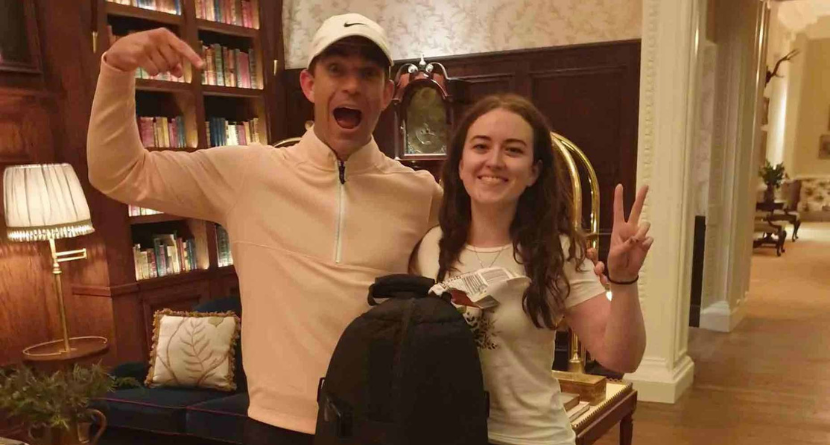 The perils of traveling with golf clubs are well documented — for pros and amateurs alike.

But every once in a while, a golfer’s nightmare transforms into a tale of hope.

Enter Shane Bacon, the Golf Channel analyst and writer who, as you might be aware, had been chronicling the journey of his late-arriving sticks on Twitter between his many TV appearances at the Open Championship this week.

It turns out outsourcing the job to the denizens of golf Twitter was a smart move. After the clubs were located at Edinburgh Airport, Bacon asked if someone would be kind enough to pick them up. Sure enough, a follower named Steff was up to the task.

We could recap the remarkable story for you, but we think it’s best to relive it by reading Bacon’s tweets in the order they were sent. Enjoy.

A little PSA for those headed across the pond – SHIP THOSE CLUBS. Use @ShipSticks or someone that’ll get your clubs here without having to use the airlines. Hearing HORROR stories of people going weeks without seeing their clubs again. Mine didn’t make it last night. Ship ‘em.

If anyone has a set of left-handed clubs and lives near North Berwick, I will pay to use them for 18 holes. I will autograph any of your children if you’d like and take selfies with grandparents. Thanks.

Update on lost clubs; went to the Edinburgh airport last night. There are golf bags now outside security with nobody guarding them. A nice club glove bag was unzipped and looked to have been picked from. Not great!

If anyone is coming through the Edinburgh airport today/tonight on the way to St. Andrews and wouldn’t mind snagging my clubs I will pay upwards of (checks work contract) $200 for a safe return of this bag! Maybe $220. And I’ll give you a lot of tees. And a koozie. And a hug. pic.twitter.com/bNsfcuF6vn

OMG SHE REALLY BROUGHT THEM FROM THE AIRPORT! STEFF IS THE BEST HUMAN EVER HOORAY STEFF HOORAY TWITTER HORRAY THIS DAY!!! https://t.co/Bq7Tbcd8zK