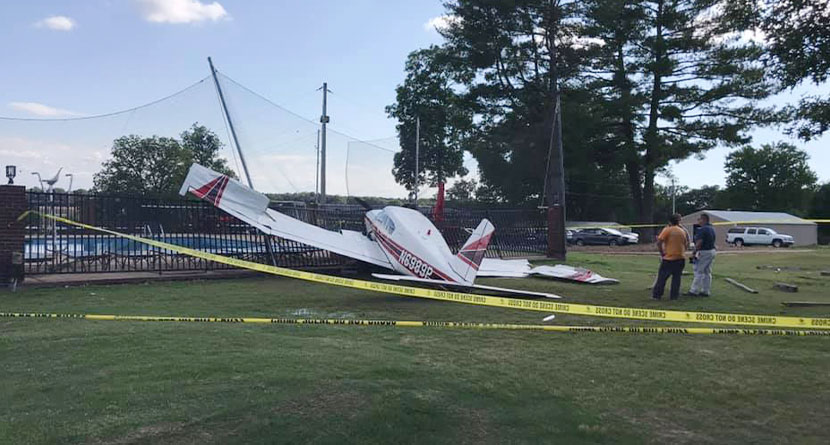 A four-passenger plane lost power shortly after taking off from Humboldt Municipal Airport in Tennesee on Friday, eventually careening across the driving range and several fairways of nearby Humboldt Golf & Country Club before coming to a stop just shy of the club’s pool.

Both the pilot and the passenger of the downed plane were able to walk away from the crash reporting no injuries, and no golfers or other patrons of the club were in the path of the plane as it crash-landed.

“It could have been a disaster,” Webb Webster, the golf pro at Humboldt, told Golfweek.com. We had plenty of bystanders who saw the whole thing. They tried to land in the fairway, but ended up crashing into the pool.”

Webster explained that that the pool is located in the center of the course, and directly next to the first tee of the 6,600-yard course. Webster said the plane touched down on the driving range before skidding through a pair of fairways eventually coming to a stop when it crashed into the fence surrounding the pool.

“You just didn’t get a chance to think about it. You really had to just react,” Chloe Wilkes, a lifeguard on duty, told WBBJTV.com. “I got over there, I said, ‘There’s a plane coming, get out of the pool.’

“I grabbed my phone and I called 911. It seemed like it was coming a lot faster than it was. By the time it had hit the fence, it had slowed down some. I feel like when it landed, it kind of hit wrong. So it slowed down by the time it got to the fence.”

The plane crashed into the pool area of the Humboldt Golf and Country Club.

Webster said there was little damage to the turf of the golf course, but WBBJ reported that the first and second holes would be closed due to the damage. The pool was temporarily closed as well.

Humboldt Fire Chief Chester Owens said he was waiting on the National Transportation Safety Board and the Federal Aviation Administration to determine the cause of the crash.