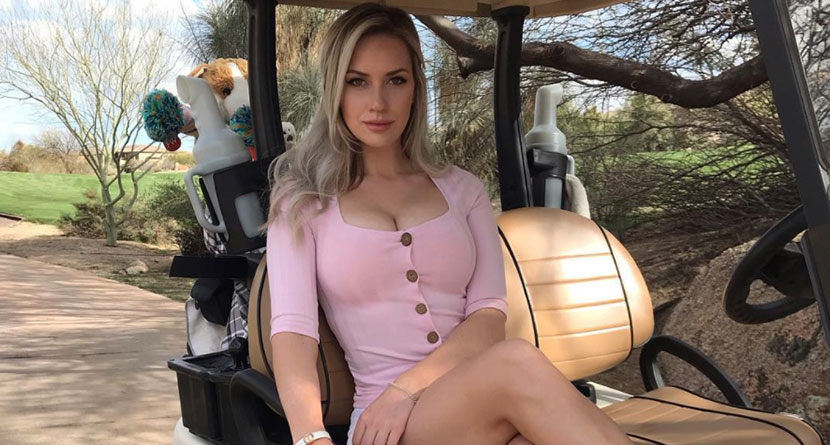 One of golf’s biggest social media influencers, Paige Spiranac, recently lashed out at the sport that has helped to make her famous for its “elitist,” “stuffy” and “exclusive” characteristics that she claims “has never welcomed (her) in.”

Spiranac, a 26-year-old professional golfer, model and social media influencer by trade, unleashed on the game on an episode of her podcast, Playing A Round With Paige Renee.

“Golf is elitist, it’s stuffy, it’s exclusive and I hate that because I am not that and I was never welcomed in and I’m still not welcomed in,” Spiranac, who boasts over 2.3 million followers on Instagram, said. “They call it a gentleman’s game, but those guys definitely don’t act like gentlemen a lot of the time.


There’s just so much hypocrisy in golf, and it’s so frustrating for me. It’s this big boys club where if someone does something they’ll cover that up, but I wear a tank top, and I’m the sl*t, and I’m the who*e, and I’m the one that’s ruining the game.”

I get out of sync in my swing a lot. My hips spin out, my arms lag behind and I feel stuck. One thing I’m working on is feeling like my back stays to the target a second longer. Something so small can make a big difference! Also I’ll be at the @thegenesisinv! Will any of you be out there? If not, no worries you can follow along on my stories?

Levying one example of golf’s exclusionary tendencies, Spiranac detailed a charity outreach she was hoping to help by providing some kids with equipment only to be told that based upon how the board members viewed her, she wasn’t welcome to donate.

“I wanted to help this charity out, and I wanted to give them free golf clubs,” she said. “The guy wrote back and said, ‘We would love to but, because of the way our board members view you, you can’t help out.’ I want to give back to these kids who don’t have anything, because I grew up not having anything, and I can’t even fuc*ing do that because of my cleavage.”

Spiranac received some expected blowback for her critical words, but made the point that winning shouldn’t be everything, and in the grand scheme of things, golf isn’t that important.

Which doesn’t make sense to me. I’d still be the same person if I was winning on tour or doing media like I am now. Nothing would be different. I would still dress and act exactly the same.

I also want to make it clear I’m not saying poor me or playing the victim. I know I’m going to get hate for what I wear and speaking out. I’m just facing it head on now instead of worrying about being accepted. I will never change myself so I can fit in.

“We bond over having a common interest and we all love the same thing,” Spiranac said. “I don’t understand why it matters if you’re wearing a polo and I’m not wearing a polo. If a guy on Tour wears shorts instead of pants, the world’s not going to end. In golf, people make all of these problems so serious and it’s not serious.”

You can listen to the full episode of Spiranac’s podcast here.