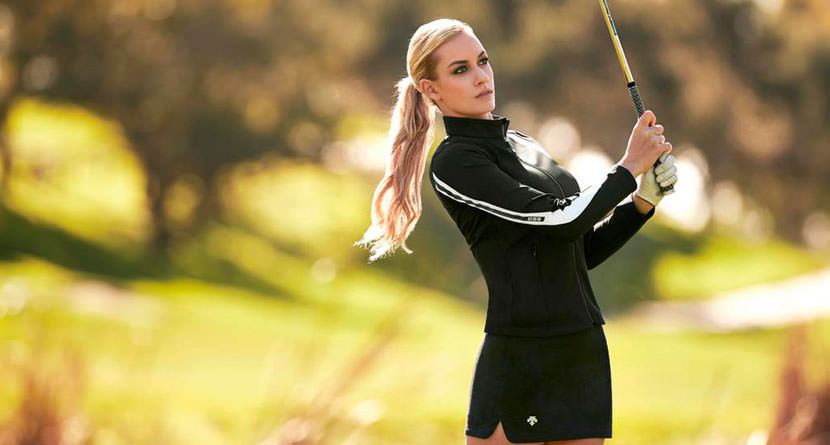 Paige Spiranac has been a controversial figure in and around golf since bursting onto the worldwide scene a few years ago. Her giant social media following has allowed her to reach millions of golfers on a daily basis, which has provided her perks that her performance on the course have yet to equal.

As a result, Spiranac’s inclusion in various events and ability to obtain sponsorships have caused a rift between her, some professional golfers and golf, but what Spiranac documented during her time in Dubai last month where she was acting as the honorary starter, crossed a very serious line.

Female golfing sensation Paige Spiranac has revealed that she received death threats over her cleavage-baring outfits after a controversial appearance at the Dubai Masters in 2015.

Spiranac, 24, is not ranked within the top 1,000 in the world for her sport but was invited to play in the Dubai’s Ladies European Tour events in 2015. The invitation sparked outrage among fans because of her low rank.

Critics suggested she had only been asked to attend because of her enormous Instagram following which today stands at 1.2million. They also pointed to her skimpy outfits and figure. Their complaints made headlines at the time but in an interview with The Guardian this week, Spiranac told how the scandal took a more sinister turn in private.

“I was harassed, my family was harassed. I was receiving death threats, people were invading my privacy, I was being blackmailed. This was going on while I was trying to play,” she said.

Spiranac, who is from Wheat Ridge, Colorado, said she was angry about the reaction to her appearance and the suggestion that it is what won her an invitation to the tournament.

“People seem to think I got where I am because of the clothes that I wear. That’s unfair to me and unfair to all of my accomplishments.

“I probably do more community service than any other professional golfer. For people to say, ‘You only show some cleavage, that’s why you have what you have,’ is unfair. That’s the injustice that we face every day as women and I see it a lot in golf.”

She wants the sport to become more progressive and believes its strict dress code is outdated.

“It’s such a male-dominated sport, it has been around for so long and there are traditions. People like their traditions without change. When someone comes in wearing leggings instead of trousers, it is like the world is ending.”

“I dress differently, I don’t conform to what golf is supposed to be. I love golf, I think it is a great game but I think there are a lot of things that need to change. I think it needs to become more progressive, more inclusive,” she said.

Spiranac returned to Dubai last month for the Omega Desert Classic and was the first female starter.