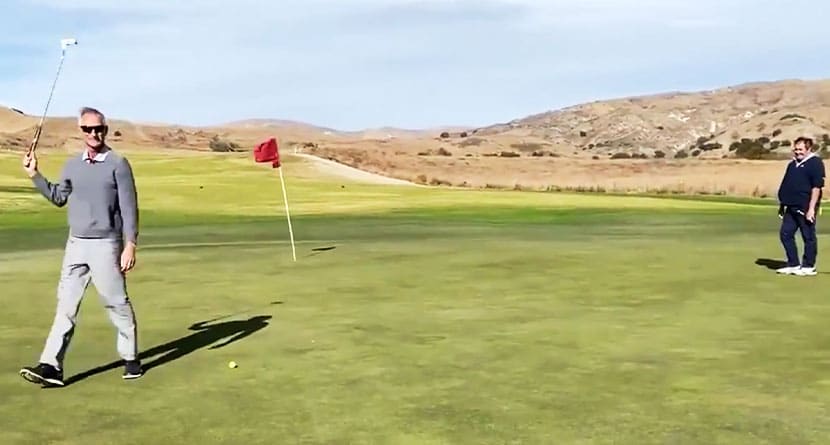 Are you one of those golfers who tunes into the U.S. Open every year looking for absolute carnage? If so, boy do we have a story for you.

It may not have been the best professional golfers in the world, but the Southern California Golf Association’s Tournament of Club Champions is about as close as regional amateur golf gets.

Requiring a club championship title and a handicap of 2.4 or lower, the SCGA’s TOCC was chock full of capable and impressive players, only two of which broke 80 earlier this week at Rustic Canyon Golf Club in Moorpark, CA.

A dreamy California day on Sunday gave way to gray skies and gale-force winds on Monday for the TOCC, wreaking havoc on the field of experienced amateur players. Winds of 40 MPH ripped across the course, forcing 26 of the 93-player field to withdraw or not turn in a scorecard and leaving the 67 others to post a scoring average of 92.5.

The eventual champion and runner-up, Ricky Montanez of Silver Lakes CC and Jeffrey Pih of American Airlines GC, both played in the first group of the day before the winds really started whipping. Montanez’s 6-over par 78 edged Pih’s 7-over par 79 to claim the title.

For perspective, Jordan Stark, one of their other playing partners, is a +1.0 handicap and shot a 91.

Here’s a 10-second clip for ya. 🤣 pic.twitter.com/dTK0cVxlVn

That’s not the worst of it, however. Golf.com’s Dylan Dethier chatted with a competitor, Andy Ho, who said it was the hardest round of golf he’s ever played.

“I’ve played a lot of golf in my days,” Ho said. “Scotland, Asia, Australia, Texas. Lots of weather, wind, etc. Yesterday was the single most difficult day of golf in my life.”

Ho, a 2-handicap, would shoot a 28-over par 100 on the day and finish in a tie for 59th. One of his playing partners, Mark Peterson, nipped Ho’s score by one, but that’s only because the +1.0-handicapper managed 6-putt a green instead of 7-putting it.

What a scene at Rustic Canyon yesterday! Consistent gusts of 30-40 and slippery greens led to some interesting #s:

Peterson’s wasn’t the worst horror story of the day, however. That distinction belongs to Grant Beachley, a 2-handicap from ParBoilers Golf Club. Beachley grinded his way to a 58-65 score of 123, 51-over par, which included an 18 on the home hole that was marked by 12 puts.

The hole, playing straight downwind, didn’t allow Beachley’s ball to come to rest, instead rolling some 30 feet back to a similar spot over and over again.

Interestingly, the scores from Rustic Canyon were posted to the various participants’ handicap accounts (with many equitable stroke control corrections made), but no Playing Conditions Calculation adjustment was added.