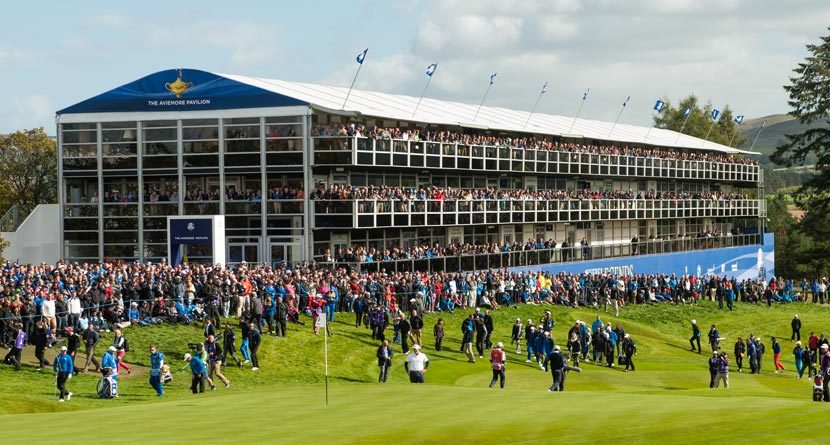 GLENEAGLES, Scotland — You think I’ve got an easy life covering this Ryder Cup, but it’s hard work you know. I have been doing some research on your behalf. First of all, I think I know where the vast majority of the 45,000 spectators have gone.

I decided to go for lunch in what is laughingly known as “The Spectator Village.” On this side of the pond, we think of villages as being sleepy little places, with few people, no cars, maybe one shop and a pub at which hardly anybody drinks these days. Most village pubs have either closed, are on the verge of closure or are being taken over by community groups who think they can do a better job than the breweries who have been in business for years and can’t make them pay.

The Gleneagles Spectator Village is nothing like that. It is a teeming mass of people — thousands of them. There are some common themes, the two most popular being food and alcohol. The burger tasted like cardboard and the chips … well, they also tasted like cardboard. I decided to wash it all down with a pint of Guinness, which set me back £5 ($8.15). Guinness is meant to be poured slowly and served in a proper pint glass. This was dispensed at the speed of light in a plastic container, and it tasted foul.

Never mind, I thought, I will cheer myself up by having a look around the official Ryder Cup merchandising tent. It was packed solid with people, and they were all buying memorabilia. Have they all lost their minds? Baseball caps at £20 ($32.50) a go, three ball markers £15 ($24.40), polo tops £75 ($122) each. You get the picture. And yet, the queues to pay were almost as big as the queues to watch the action out on the course. So why would anybody pay £15 for three ball markers? “It’s a nice little souvenir for my son,” said Bob Hatton, from Glasgow. “And it’s genuine Ryder Cup merchandise, none of your foreign rubbish.” I hardly had the heart to suggest that it was almost certainly made in Korea or China.

An American couple was struggling under the weight of its purchases. Chuck and Debbie Manson are from New York — that would be the same New York where tens of thousands of Brits go every year to buy clothes because they are cheaper.

“You can’t come to the Ryder Cup and not take back souvenirs,” Debbie told me.

“And what have you got there?”

“A couple of baseball caps, some towels, ball markers, golf balls, a couple of polo tops and some pants,” said Chuck, beaming.

“And how much is it all going to cost?”

“Not a clue, buddy, until we get to the check-out.”

Apart from a massive bar known as The Striding Man (don’t ask — I haven’t a clue), there are various hospitality areas at which vast amounts of alcohol are being consumed. Meanwhile, Daigeo, one of the biggest brewers in the world, also has people wandering around the site encouraging people not to drink and drive.

I am sorry, but you just have to laugh.