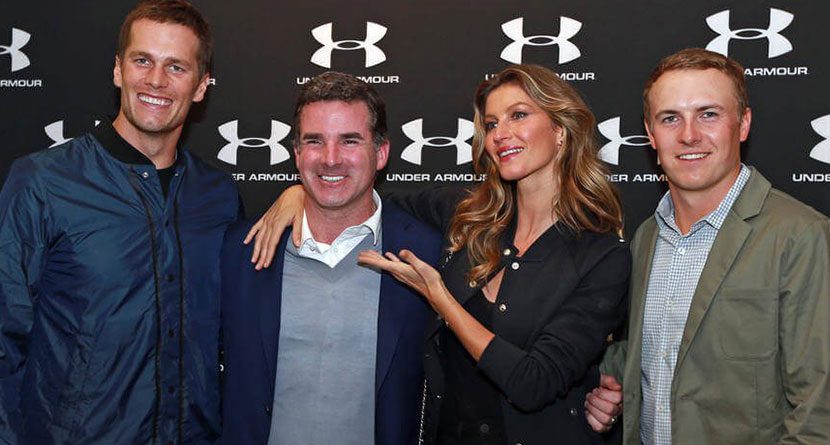 Under Armour officially opened a new retail store, the Boston Brand House in the Prudential Center Mall, with the help of top executives and brand ambassadors such as Jordan Spieth and Tom Brady. Courtesy of Under Armour.


FootwearNews.com caught up with Spieth to get his impressions of the new store, as well as some of UA’s new shoe offerings.

Spieth touted the new location — with six large windows directly facing Boylston Street, and about a block from the Boston Marathon finish line — as “very sleek, very modern, very aggressive.” Inside, a floor-to-ceiling image of Spieth adorns the store’s golf section, which he described after seeing for the first time as “just unbelievable, isn’t it? It’s crazy.”

Spieth, who wore a pair of UA Charged 24/7 Low sneakers, told Footwear News, “I love these new wear-every-day shoes. These are making a move. As you can tell, these are pretty worn out. I wear these almost every day.”

The PGA golfer, who has a 10-year endorsement partnership with Under Armour, said as a first-time visitor to the store he likely would be shopping for tennis and training shoes as well as “comfortable outerwear” such as hoodies and jackets.

Spieth, a Texas native, also admitted that when he’s not rooting for the Dallas Cowboys, he’s “a big Patriots fan” and is no stranger to New England. He said he’s made trips to Providence, R.I., about an hour south, because his brother attends Brown University there.

Spieth and Brady are members of the Mutual Admiration Society, reiterating during the launch that both are big fans of the other, but we already knew that thanks to previous UA engagements the two have participated in.

Here are a couple more pictures of the store.