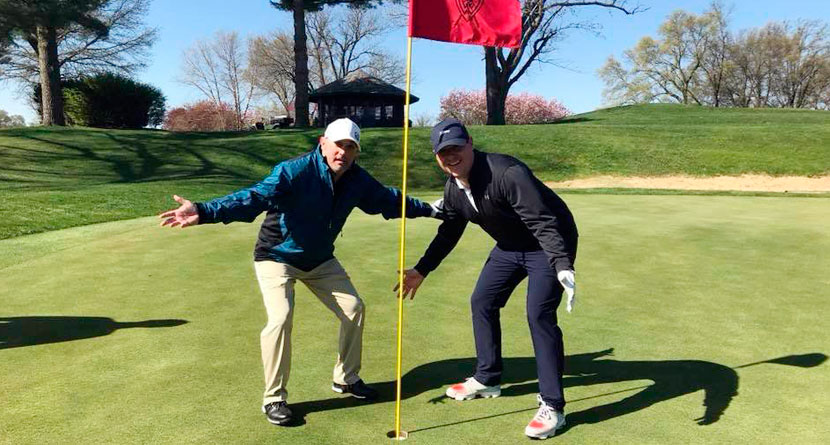 Golf is a numbers game, from club selections to yardage to the score. Rarely does 17 ever mean anything good on a golf course, except of course, when you’re either Howie Sher or Brian Halpern and you just bucked 17 million-to-1 odds by hitting back-to-back aces on the same hole.

On April 29, the pair were playing a round together at Westwood Country Club in St. Louis, Missouri when they came to the par-3 7th hole. Neither Sher nor Halpern had ever hit an ace, but that was about to change.

“I let it fly, thinking I put a good swing on it,” Sher told The St. Louis Post Dispatch. “The ball hit the sweet spot of the top tier ledge and then, as if it was on a string – …one one-thousand…two one-thousand…three one thousand… – it’s gone. Where did the ball go?”

The bottom of the cup.

In disbelief, Sher engaged in high fives and chest bumps, still processing whether or not that had actually happened when Halpern stepped up to the tee.

“To be honest, I was just trying to make sure I hit contact because I had so much adrenaline going from watching Howie,” Halpern said. “When I hit the ball I chunked it a little bit but had a good line. It was going a little left of the pin and landed on the left fringe pin high. After it landed, it took a hard bounce up the hill and then ran down the hill in a beeline for the hole – just like Howie.”

“What happened is not believable,” Sher said. “I’m sure the odds are debatable, but I’ll bet winning the lottery might be easier.”

The Most Prolific Hole-In-One Golfer Of All Time?

“I think all of our reactions were out-of-body,” Halpern said. “I don’t even really remember what we all did when I hit it. I just remember jumping and yelling with all the guys after it happened. We clearly had a loud and great celebration as members that were playing on nearby holes all came by to congratulate us.”

Sher and Halpern had never met prior to that round last Sunday, but they are inextricably linked for the rest of their lives. As Halpern put it, “I told Howie I just met him, yet his mug will forever be framed on my wall in the picture of us celebrating together.”