The Story Of Three Aces In Three Consecutive Days 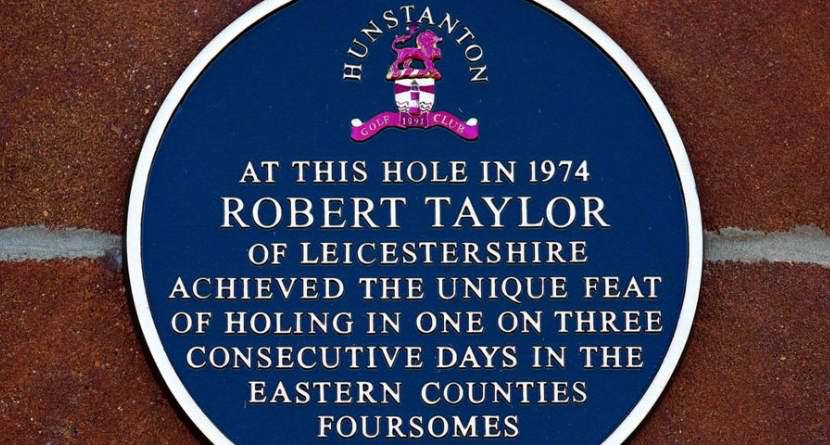 If you’ve ever made a hole-in-one, chances are that you have a story that goes along with it. While we are sure it was as amazing as it sounds, it probably doesn’t compare to this one.

David Cannon, who’s been snapping some of golf’s legendary photos for Getty Images over the past 34 years, unleashed this gem of a story in a recent interview with the Lady-Golfer about his friend, Bob Taylor, who made three aces on the same hole, on three consecutive days.

Allow us to set the scene in the U.K. for you. Back on May 30, 1974, Cannon’s Leicestershire and Rutland County golf team traveled to Norfolk’s Hunstanton Golf Club for the Eastern Counties Foursomes, an annual golf event that involves nine counties and is played over a weekend.

Late in the afternoon, news filtered through that one of the Leicestershire squad had managed a hole-in-one at the 16th. Bob Taylor, after his three playing partners had in his words ‘ballooned their 4-woods short,’ got out his 2-iron that he had bent to the loft of a 1-iron and punched it into the stiff easterly breeze.

Landing on the apron at the front, it scampered up the green and into the hole. Such events are rare, so naturally a celebration followed and we all, well most of us, eventually headed merrily to an early bed with 36 holes to follow on the next two days.

Bob again teed it up on the 16th with his trusty 6-iron. The same swing, the same shot, the same landing point on the apron, then – wonders of all wonders – the ball disappeared into the hole for his second hole-in-one on the 16th hole: twice in two days – beyond belief!

So our hero Bob stood on the tee facing that tee shot for the fifth time in 48 hours, with again a not insignificant gathering of interested spectators.

One hundred and eighty-nine yards downwind, smooth swing, lovely strike, pitch on the apron, a couple of decent bounces, an almost unerring roll towards the hole, and the next thing we knew, Bob and Bill were shaking hands with the Suffolk pair on the tee as his ball had found the hole again. Three times, five shots, three days and three aces on the same hole.

The yells and clapping could probably be heard for miles around, and the celebrations continued long into the night. We had witnessed the greatest hole-in-one feat of all time, probably one of the greatest golfing stories of all time. For me personally, it is one of my favorite stories to tell, and I have seen golf in all parts of the world.

It shows miracles do happen, and luckily enough, I was a member of that Leicestershire team and did actually witness one of the shots from the 17th tee in the match in front – a moment I will treasure always.

Three aces in three consecutive days by the same man. There’s even a plaque to prove it.

Now, what was your story again?