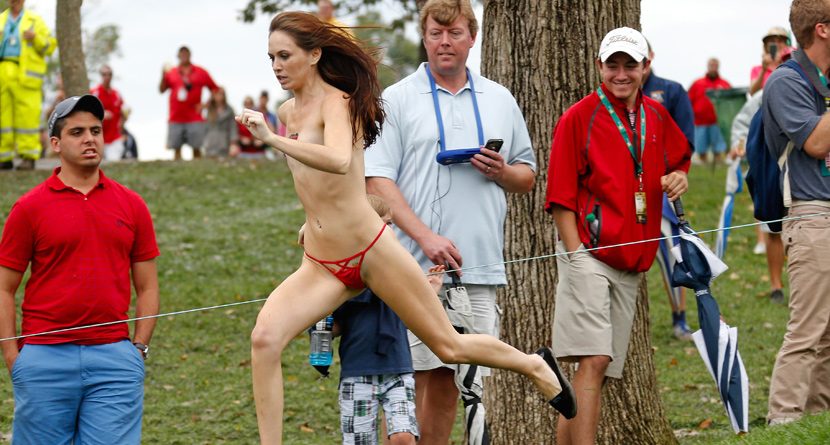 WCMH News in Columbus, Ohio caught up with the streaker who is identified as 23-year-old Kimberly Webster. She was arrested on the course on Sunday but was only charged with disorderly conduct and issued a $100 fine. Here’s what she had to say about the incident:

Moments before the United States team successfully defended their Presidents Cup victory from 2011, a female streaker shocked galleries by running around like a lunatic.

Related Link: What Women Are Really Thinking When They Meet “The Nice Guy.”

This probably goes without saying, but the photos might be a tad unsafe for work. Boom boom getting him a full view today on 18!’ pic.twitter.com/bHF7nmJ7xB

To be fair, the streaker wasn’t totally naked. She ran onto a fairway wearing a red g-string, black shoes and what appeared to be American flag stickers on her – um – chesticles. A message of ‘Support the Troops’ was also written on her back, reminding us all that the best way to show your appreciation for the brave men and women in the armed forces is to run around naked in public… ok, I’ll stop. Sorry.  She was just a nutjob with a marker and some stickers.

But she’s getting her 15 minutes of fame: