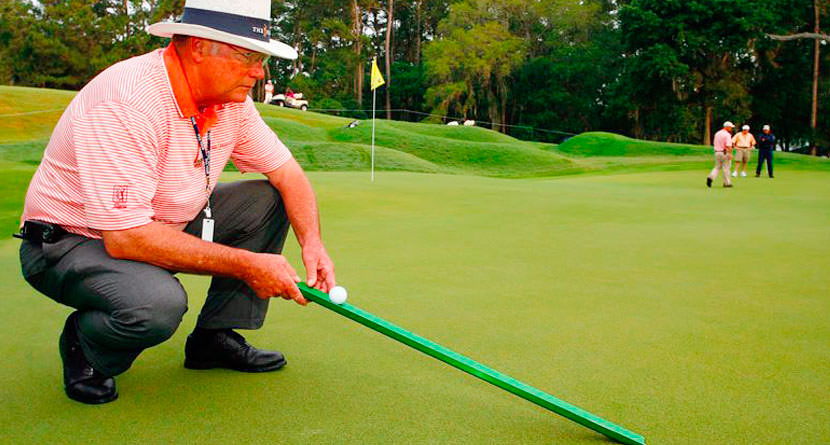 The USGA recently teamed up with the University of Minnesota to conduct a five-year research partnership that is “focused on the long-term sustainability of the golf industry, exploring the role golf courses play in ecosystems and how science and design can be utilized to increase the ecosystem services and value that golf courses provide society.”

As a project aimed at sustaining the game in many forms for years to come, the Science of the Green Initiative released a report this week that detailed a problem that many courses face, resulting in one of the biggest obstacles in golf today: slow play.

The study’s findings found that the pursuit of faster greens not only impacts the health of the turf that the game is played upon, but also results in slower play to the tune of 6.39 seconds per green per player. While that number isn’t huge, it does add up over the course of a round and over the course of a day’s worth of play.

As if  that wasn’t enough, the study also concluded an increase in speed results in a decrease in playing experience.

Here’s what Parker Anderson of the Science of the Green Initiative released from the study.

The Science of the Green Initiative’s Green Speed and Pace of Play study is exploring how golf course conditions such as green speed impact pace of play, round times, and player experience. Pace of play and golf course conditions are key variables in the success of the golf industry (USGA, 2017a). Slow pace of play and long round times are often cited as deterrents for potential participants and create inefficiencies in the throughput of a golf course, therefore not maximizing the facility’s revenue potential (Tiger and Salzer, 2004; USGA, 2017a).

Golf facility managers are pressured to increase green speeds, but these faster greens can result in decreased turfgrass health, higher maintenance costs, decreased player enjoyment, and potentially longer round times (Danneberger, 1993; Doak and Crosby, 2017; McCarty, 2001; Sachs and Luff, 2002). Anecdotally, it is a common belief that faster green speeds result in slower pace of play, potentially because of the increased putting difficulty of fast greens or the longer amount of time a ball rolls on a faster green. If this is true, pressure placed on the superintendent to provide faster green speeds does not align with the success of a golf facility and the enjoyment of the golfer. If slow play is a factor in influencing participation, substantial effort needs to be placed in maximizing the throughput of a facility and decreasing the waiting times of golfers (Tiger and Salzer, 2004).

We hypothesized that there is a positive correlation between green speed and pace of play; as greens are managed to play faster, the time it takes to play a round of golf also increases. Therefore, our objectives were to: 1) test the pace of play (time required per player per green) against the green speed (measured by Stimpmeter in feet; see Figure 1) and 2) examine how significant green speed is in impacting pace of play. The green speeds were measured using Stimpmeter readings (Figure 2) and the pace of play was measured using GPS data (Figure 3) of time spent on each putting green for each player throughout a round of golf. Seven golf course study sites around the United States were selected to represent a cross-section of the industry with a variety of golf course characteristics (i.e. public, private, regional differentiation, etc.).

In conclusion, we found that faster greens equate to longer round times. The strength of this relationship, however, is not as substantial as we had hypothesized. More research needs to be conducted in order to understand the relationship between pace of play and the many variables that impact round times. We are preparing a research paper to publish these and other results. For more information and to keep updated on the project visit scienceofthegreen.umn.edu/current-projects/green-speed-pace-play.

[Science of the Green Initiative]