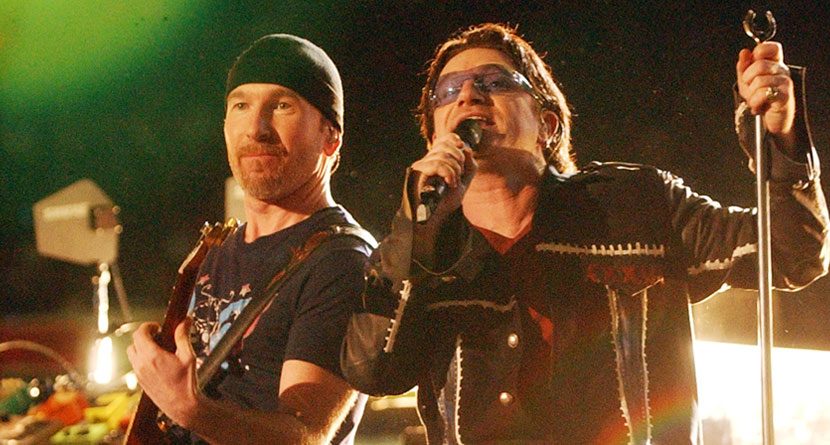 Now that Bruno Mars has been announced as this year’s entertainment during the 2014 Super Bowl Halftime Show, we at the Back9Network began reminiscing about the best – and worst – halftime spectacles in recent memory.

Come take a walk down memory lane as we remember everything from the New Kids on the Block to Madonna and everything in between.

You read that right folks; the 1991 Super Bowl between the Buffalo Bills and New York Giants was highlighted by a memorable performance from NKOTB and Houston Oilers quarterback Warren Moon. I still don’t know how the two are related, but since when does that matter when it comes to entertainment?

The following year’s performance at least had a memorable theme as Estefan “rocked” the show with hits like “Walking in a Winter Wonderland” while Boitano and Hamill dazzled on ice skates.

Super Bowl XXVII will never be remembered as the day the Dallas Cowboys steamrolled the Buffalo Bills 52-17. Instead, it marked the night the King of Pop dominated the world in what many believe to be the best halftime show of all time.

Two years later the halftime show boasted some of the biggest current names in pop and even an homage to Phil Collins, once of music’s greatest modern artists. It was a memorable way to kick off the new millennium (see how I used “kick-off” to describe something about football? I’m a talented writer).

Without a doubt one of the most heartfelt halftime shows of all time, 2002’s rendition paid tribute to those who lost their lives during September 11th the previous year. U2 gave the world a phenomenal performance that will live on for years.

Hey, remember that time when Janet Jackson and JT joined up to give us a show everyone will remember because of singing and musical talent? No? How about the time we all saw a nipple on national television? Oh yeah!

Rock and roll made its triumphant return to the Super Bowl by way of the Rolling Stones, which played three of their greatest hits in front of the Ford Field crowd. This also marked the first time Mick Jagger may have looked worse than Keith Richards.

Price’s halftime spectacle was just that: a spectacle. He singlehandedly turned the Super Bowl into his own personal rock concert, and the music world was better for it. Unfortunately, copyright laws prohibit any footage of the show to be on the internet.

What better way to close out the decade than to bring one of rock’s biggest names to the Super Bowl stage? While his performance was met with mixed reviews, rest assured that nobody does it like The Boss.

Rock reigned supreme once again at Super Bowl XLVI as the legendary Who played five of their greatest hits for the Sun Life Stadium crowd. It may not have been the most exciting show in the world, but a whole new generation of football fans were introduced to rock royalty.

The halftime show went back to pop after a long stretch of rock acts, and it doesn’t get any bigger than Madonna. While she appeared a bit sickly at times in her scantily-clad outfits, combining her talents with some of pop’s biggest names made this a show to remember.

Remember when I said Michael Jackson’s halftime show was possibly the best of all time? Beyonce almost trumped it in 2013. Almost. The pop icon showed everyone why her nickname is Sasha Fierce as she single-handedly took control of the biggest spectacle in sports.