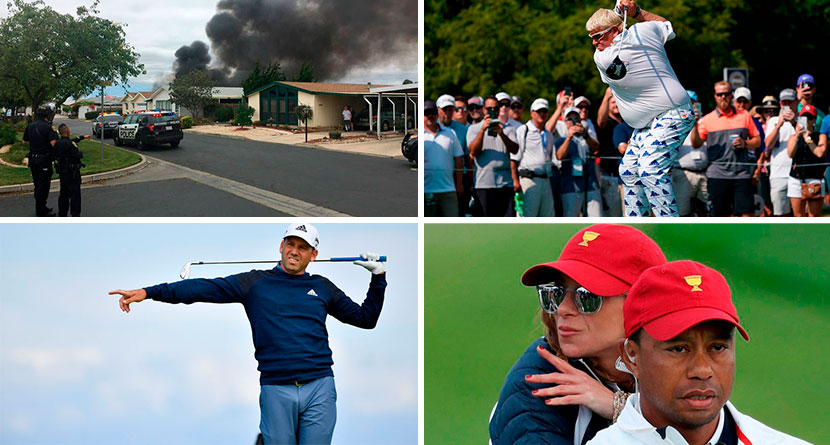 With 2019 coming to a close, New Year’s Eve is a time to reflect on the year that was and prepare for the year to come.

While there was no shortage of storylines on and off the golf course this year, five articles in particular seemed to really catch the eye of the collective SwingU Clubhouse audience to the tune of over 345,000 pageviews between them.

The top-5 were a mix of off-the-course lifestyle news and on-the-course drama that showed the interest diversity of the SwingU Clubhouse audience.


Without further ado, here are the top five stories of 2019.

A bizarre story out of Casa Grande, California towards the end of June left five people dead, two of which came as the result of an argument and altercation in the community’s golf course clubhouse. A man retrieved a gun from his home, returned to the golf club after the argument and shot and killed two others.

When he returned home, an explosion that was aided by a large reserve of ammunition killed the shooter as well as two others who were in the house at the time of the explosion.

John Daly has long been a fan-favorite, so when he posted that he had one of the scariest moments of his life over the 4th of July holiday, golf fans around the world took notice.

As it turned out, a spider bite from a brown recluse that occurred while Daly was in England, which resulted in Daly receiving mouth-to-mouth resuscitation and emergency surgery a major infection in his abdomen as well as early sepsis.

Sergio Garcia has long been one of the most polarizing figures in golf. The love-him or hate-him reputation he has built only festered in 2019 as the Spaniard found himself embroiled in controversy after controversy.

Garcia’s year had already seen him disqualified from a European Tour event for losing his temper and damaging various bunkers and greens at the Saudi International as well as getting caught up in a concession controversy at the WGC-Dell Match Play with Matt Kuchar, perhaps the only other player to have a year filled with more PR nightmares.

However, a video surfaced of Garcia throwing his driver towards his caddie in frustration during the 2019 Open Championship that really got folks up in arms.

Tiger Woods’ year was much less controversial than Sergio Garcia’s on the course, but the unfortunate death of a former employee at his Jupiter, Florida restaurant brought Woods and his girlfriend, Erica Herman, into the public spotlight off the course.

The two were sued for wrongful death by the parents of a former bartender at the Woods-owned restaurant who died in a drunk-driving accident late last year.

Nicholas Immesberger’s parents claim Woods and his girlfriend Erica Herman knew their son personally and that he struggled “with the disease of alcoholism.”https://t.co/y2QQCBg5f8

Both Woods and Herman were removed from the lawsuits subsequently.

Why Tiger Chewed Gum En Route To His 15th Major

The biggest on-course storyline of 2019 had to be Tiger Woods’ historic 15th major championship victory at Augusta National in April, however, a subplot had the golf world buzzing. Tiger Woods, as well as other big names such as Phil Mickelson, were rumored to be chewing CBD gum on the course.

While Mickelson spoke to the New York Times about his gum-chewing obsession, Woods took a more measured stance when discussing his noticeable gum affection during the Masters.

“Well, I’m chomping on this gum because I usually get hungry, I keep eating so much,  and it curbs my appetite a little bit, which is nice,” Woods said in his champion’s press conference. “Most of the time, most of the issues I have at tournaments, I lose so much weight, as you all know.”

Thank you to all the SwingU Clubhouse readers for a fantastic 2019. We’re looking forward to bigger and better things in 2020.