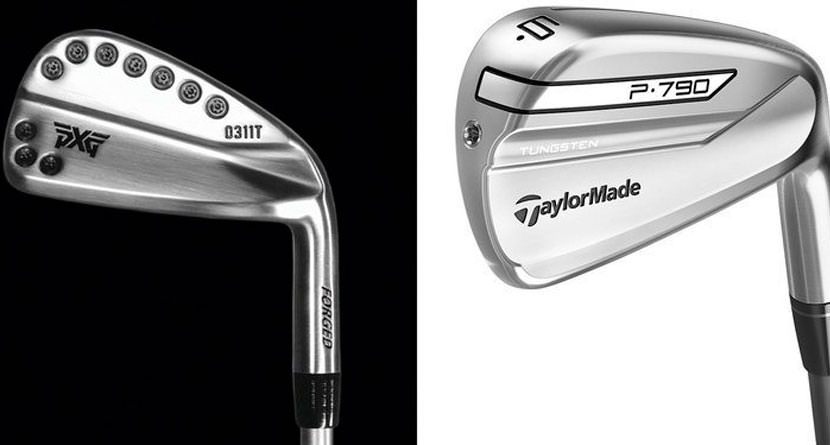 TaylorMade went on the offensive in their on-going legal battle with PXG that stemmed from a lawsuit the Scottsdale-based upstart levied earlier this year.

The rancor between PXG and TaylorMade over golf club patents continues, only now legal accusations are being fired from both sides.

In documents filed in U.S. District Court in Arizona two weeks ago, TaylorMade is now accusing PXG of violating patents.

According to the documents, TaylorMade details how PXG is violating seven TaylorMade patents in irons and woods. The 189-page counterclaim not only denies that TaylorMade is infringing any of the PXG patents, but also asks the court to prevent PXG from selling most of its current products, including all the PXG 0311 irons (0311, 0311T, 0311XF, 0311X) and PXG woods, including the 0811 drivers and 0341 fairway woods for violations of patents granted to TaylorMade between 2007 and 2016.

The two companies have been in a legal tussle since PXG filed suit in September, accusing TaylorMade’s about-to-be-introduced P790 irons of violating eight PXG patents. PXG requested a hearing for a temporary restraining order and preliminary injunction to stop the sale of the TaylorMade irons, but was denied the request three days after it was made.

PXG subsequently has brought in new lawyers for its case and its original lawyers withdrew in October. The new PXG lawyers include Brian Lacorte, an intellectual property lawyer with the Ballard Spahr firm based in Phoenix.

TaylorMade’s lawyers, from the Washington, D.C.-based intellectual property litigation firm Sterne, Kessler, Goldstein and Fox and the Phoenix-based Beuss, Gilbert, also requested that PXG’s case be dismissed for “failing to plausibly allege” that the P790 irons “practice even a single claim of the asserted patents.”

TaylorMade’s documents also make the case that five of the patents in PXG’s original lawsuit should be declared invalid “for failure to satisfy the conditions of patentability.”

In requesting the original PXG patent infringement case be dismissed, TaylorMade’s lawyers are citing a plausibility standard that requires a plaintiff to produce facts in its initial filing that “nudge their claims across the line from conceivable to plausible” that patents were infringed.

TaylorMade’s lawyers are saying PXG has failed to do just that. In its request for dismissal, TaylorMade’s motion states, “because PXG’s complaint fails to map the features of the P790 irons onto the limitations of even one claim, the complaint should be dismissed.”

TaylorMade’s denial of infringement of the PXG patents is not surprising (and already was originally argued by TaylorMade in winning September’s temporary restraining order hearing. Its decision to countersue PXG for patent infringement, however, suggests it’s not merely defending itself, it’s asking the court to do the same to PXG that PXG was asking the court to do to TaylorMade. Only in this case, TaylorMade isn’t interested in stopping the sale of just one product. It’s going after nearly all of PXG’s inventory.